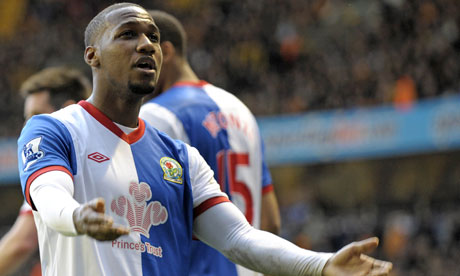 There's some good news emerging regarding Newcastle United target Junior Hoilett. As of tonight, it is understood that Hoilett's contract will officially expire and NUFC are reported to be making their move for the winger. Unless you hid under a stone for the entire Premier League season that has just passed us, then you'll know that Hoilett had a decent season, and scored some great goals for a team that eventually surrendered to relegation. There's little argument in the suggestion that Hoilett is Blackburn's best player and after the departure of their other prolific goal-scorer Yakubu - who left to foreign moneybags - Junior is weighing up his options too. An instant return to the Premier League will prove too much for the Canadian born winger.

While it is believed by so many that Hoilett has actually signed for German outfit Borussia Monchengladback - this is untrue. Whether they have a verbal agreement in place is a different matter entirely, however, NUFC aren't going to let him out of their grasp very easily it seems. Reading on the other-hand are also understood to have spoken to Hoilett himself, but without being too disrespectful to the newly promoted club; I think he'd opt for a move to either Germany or Tyneside before joining the Royals.

Indeed all our transfer focus in the media is on our pursuit of Luuk de Jong and Mathieu Debuchy, and during all of that it seems we're making calls back in England too.

One journalist, Duncan Castles who you might know from the Sunday Times or the Guardian, Tweeted this in the last hour:

If we do actually manage to lure de Jong, Debuchy, and Hoilett - what a fantastic start to the transfer window that will have been.