Newcastle won’t be forced into bidding war for de Jong 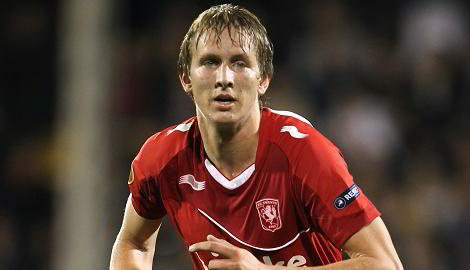 #### de Jong - Wants to play his football in the Premier League

While Newcastle United are trying their hardest to bring Luuk de Jong to St.James’ Park, they have told FC Twente's negotiators that if they are too greedy over their forward, then the North-East outfit won't think twice about pulling out of any deal. Derek Llambias, alongside Lee Charnley are present in Holland and are hoping to take a trip down to France to talk to their other main target Mathieu Debuchy (if he isn't holidaying already!). The general consensus in the Newcastle camp is that they will have one player in their bag when they land back on Tyneside in the coming days.

Steve McClaren - who seems to succeed everywhere outside England - claims that it would take a huge fee to see Luuk leave, and that he isn't terribly worried about the rumours surrounding his men. It seems that McClaren is very much adopting an Alan Pardew approach to matters and to be fair, you can't blame him for doing so.

FC Twente want a fee in the region of €15m for de Jong, but NUFC are hoping a cash deal of €12m would be enough to tempt a sale. While the Dutch side are somewhat tempted by this offer; they know that Benfica who have expressed an interest in Luuk, may well pay their desired fee of fifteen million euros.

However, it is very much a matter of waiting and playing their cards correctly and Newcastle United aren't going to forced to match any ‘silly’ bids. Llambias, Carr, Charnley and Pardew all know that if he doesn't make a move to NUFC this summer, then he is likely to stay put at FC Twente - and his contract grows one year shorter. Meaning, he could be cheaper next year, providing he doesn't bag 35 goals and take a grip on the Dutch international #9 jersey.

We are in a similar situation to that of Papiss Cissé. Freiburg wanted a fee of £15m for their star man a season earlier and although NUFC were interested, they didn't like the look of the price tag, and waited 18 months until signing him for £9m cash - six million less than what they were quoted previously.

Inevitably, if a fee for de Jong isn't agreed on Newcastle United's terms then he won't arrive at St.James’ Park this season. There are other targets lined up and despite being somewhat of a forgotten man - Modibo Maiga is still on our list of potential targets. Mainly, because he'll cost a lot less than what we almost signed him for a season ago.

Either way, I'd like us to sign Luuk this summer purely because he's a very talented player and we seem to appeal to him. After another season in Holland, as aforementioned - he could either excel to a standard where bigger clubs will look to tie him to a deal, or remain relatively the same and then we'd make our move for him.

What do you kind folk, think we should do? Stick or twist?