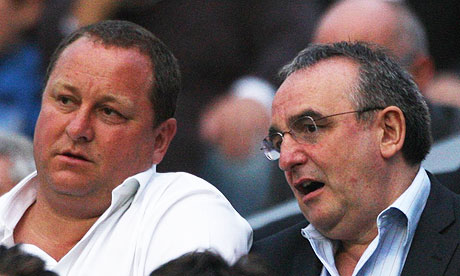 Not many people might have realised, but our £11m bid deemed unacceptable by FC Twente, for their star man Luuk de Jong, happened to be the highest ever bid Mike Ashley has financed in his NUFC tenure thus far. When Ashley arrived on Tyneside, he immediately threw forward £10.3m to sign Fabricio Coloccini - a well spent ten million if you ask me. However, later he dished out £5m more to finance the signing of Xisco from Deportivo yet again, which probably turned out his worst ever signing. Since that deal never worked out and according to the blueprint in place - little money was injected into our managers coffers in the last couple of years, until, we could afford to, via the Andy Carroll sale.

The £9m signing of Papiss Cissé signalled that Mike was willing to pay up for the right type of player, and slowly but surely, he was beginning to trust the men around him; Charnley, Carr, Pardew, Carver. Since Cissé has almost scored in every game since arriving, it is only human nature to happily give even more, in the hope for something as good, or even better.

Our £11m bid for de Jong was rejected out of hand by FC Twente, and they've made it quite clear that they won't part with the Dutch international unless a bid of £15m is tabled. NUFC will not go that far, and will turn their attentions elsewhere.

de Jong isn't scratched off the list though, as Pardew and co. will reassess options in January, and just maybe, we'll be able to land Luuk for a smaller fee than what we offered originally.

The encouraging thing about this deal is that Mike is supporting the club, in every sense. Actually, I think most people are beginning to warm to his plan for the club. He's still very unpredictable, but you can see what he is trying to achieve.

Financial stability, and self-sufficiency are the #1 priority, and we have made incredible progress in that department.

While we may not sign our priority striker target this summer, it is clear that we are looking to get business done swiftly and will not be left in the lurch come September 1st, like seasons before.

It's exciting times for NUFC and the next few weeks should see some very interesting developments in the Debuchy and Douglas cases.

AND, if you're not following us on Twitter or haven't liked us on Facebook yet - do it now!