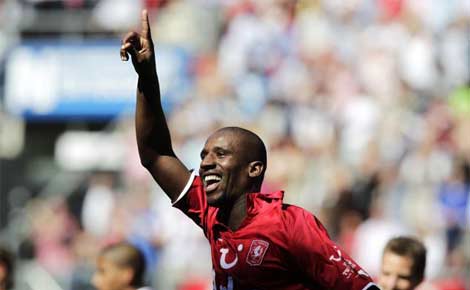 During Sam Allardyce's tenure at Newcastle United, he signed Alan Smith, Mark Viduka, Claudio Cacapa, and Joey Barton name a few. To say those signings turned out to be quite disappointing acquisitions - Jose Enrique aside - would be putting it very mildly indeed. Now however, Allardyce seems to be taking his targets from Newcastle United's scrapbook. A couple of days ago, West Ham United announced the signing of Modibo Maiga - a player that was hours away from signing for NUFC, only for our medical team to pull the plug on the move after concerns of a thigh injury. Big Sam saw no risks, and signed him up long-term with the hope the Malian can fire them to safety.

In the last week - West Ham have also shown serious interest in brining Andy Carroll to Upton Park on loan with the view to a permanent £15m deal in the summer. Andy didn't fancy a move to London though and any potential bid dwindled.

Try and try again does Sam, with his latest transfer bid being for a certain Douglas, the FC Twente Brazilian born defender. NUFC have been linked with the CB the last year and finally submitted a €4m bid for his services, a bid they are still waiting to hear back on. West Ham have reportedly also matched that amount, as well as Martin Jol's Fulham who have been advised by their recent recruit from Twente, Bryan Ruiz.

With Steven Taylor coming back to fitness by the day (he trained with the team in Munich today :)) and Colo raring to go - it's tough to see where Douglas fits in, straight away at least. Apparently he's a long-term replacement for Coloccini, but let's be honest - we need defensive recruits as our array of centre-backs in particular isn't very pleasing on the eye.

Ideally, we need two sets of CB's. Taylor and Colo first choice; Williamson and Douglas second choice would appear to be what we're aiming for, with Douglas establishing himself as a first teamer within 1-2 years, he is only 24 years of age remember so plenty of time to adapt.

Going back to the headline - somehow I can't see Allardyce winning this race or any of his races for that matter, but I could be wrong. I know I certainly don't want to lose this fella to West Ham, I'm not sure about you!

Any Twente fans out there? Feel free to tell us what we don't know about the soon to be Dutchman.