Newcastle United vs. Tottenham Hotspur: How will we line-up?

The time has finally come. After months of gruelling pre-season Newcastle United finally get their 2012/13 Premier League campaign underway against a new-look Tottenham Hotspur, at half five, Saturday evening. Thankfully, the season starts at home in Newcastle, and against a side that Alan Pardew's men will be looking to get one over on, following an embarrassing display in London in the return fixture last season; a game which Spurs won, 5-0. However, the task of gaining all three points won't be any easy feat, and it's likely that it'll be quite a cagey encounter with either side unlikely to go all gung-ho - certainly in the early stages of the game.

NUFC enter the game with Papiss Cissé, Demba Ba, Yohan Cabaye all doubtful to gain fitness in time for KO. Hatem Ben Arfa is also struggling and is the most likely candidate to sit the game out.

Without either Cabaye, Papiss or Demba, things get that little bit harder for us. People will wonder where our attacking prowess will come from without those key men, but we needn't worry too much about that. With all considered, it might be worth taking a peek to see what offers the bookies have for our 1st Premier League game.

THFC on the other-hand will look to quite a beleaguered forward line to fire them to victory with just Jermain Defoe looking any bit threatening. Giovani dos Santos could be dangerous, but it's unlikely that he'll start from the off.

Indeed, I would expect just Defoe to start up top, with Bale and Lennon/Sigurðsson pushing further forward to support. Boas’ side boast pace, and NUFC's back four will need to be on their toes to thwart any danger.

With all considered, I have compiled a NUFC Starting XI that I think could well start tomorrows game. My selections could be way off, but only time will tell. 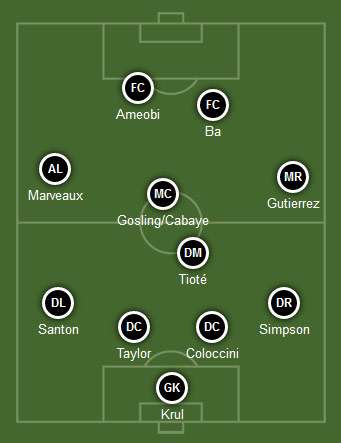 I honestly don't think Cissé will make it, and I certainly hope he won't be risked unless he is 100%.

Ameobi could lead the line, beside Demba Ba - should the Senegalese forward declare his fitness before KO.

Marveaux and Gutierrez will operate the wings, while Tioté will protect a back four behind Gosling (if Cabaye can't make it).

Steven Taylor returns to CB almost unquestioned, while Santon and Simpson are expected to keep their respective positions in the full-back spots as well.

I think we're in for a tight afternoon, with very, very little separating the sides.

I do expect us to score, but I would be very surprised if we kept a clean sheet. We usually start the season in a low scoring fashion, and with the squad doubts & threats considered, I've decided to place a small wager on the following: Newcastle United 1-1 Tottenham Hotspur.

Ameobi a couple of minutes from time to even things up at 1-1 would suit me fine! 😀

Comments welcome as always. Who do you think will start in midfield, or up front for us at 17.30?