Newcastle United vs. Aston Villa – How will we line-up?

With Cheick Tioté ruled out of tomorrows encounter with Aston Villa, I think it's worth a look at how we might line-up especially, without our key African in midfield. His absence against Chelsea was obvious as we were overrun in midfield time and time again, despite the best efforts of new boy Vurnon Anita who did as well as could be expected considering the circumstances. The failure to add anyone in the final days of the window also came a bit of a disappointment to fans, and hopefully we won't live to regret it during our European and domestic adventures . Then again, we kept all our best players and that alone was very encouraging.

Villa, who arrive at St.James’ after a shocking open to the season so far, will hope to get at least a point to spur them on to a good run in the coming month. However, NUFC will be hoping to get to winning ways in the league, to add to their current 3 points total.

After scraping by our Greek opposition in the Europa League during the week, Gabriel Obertan might stake a claim for a start tomorrow, but with everything considered; here's the side I expect Alan Pardew to put out at 4PM: 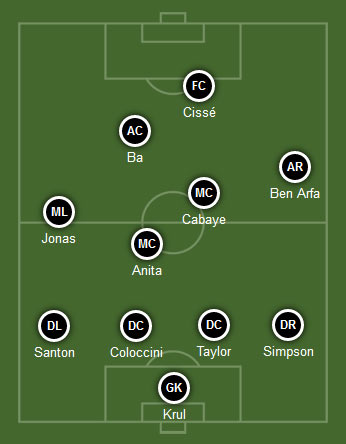 Krul is an obvious starter between the sticks while Simpson, Coloccini, Taylor and Santon are also expected to make up the back four per usual.

In midfield, Tioté absence will more than likely see Anita starting in the holding role like at Chelsea, while Cabaye will play just ahead of him. I expect Cabaye to push further a little more than usual tomorrow, so he might be worth a shout for a goal.

On the wings Jonas should retain his spot, while our mercurial Hatem Ben Arfa is expected to hug the right hand touch-line, while varying his runs against what could be an unfortunate Aston Villa LB.

Up top Demba & Papiss are almost guaranteed to start together with Cissé a tad further forward than Ba who will drop a bit deeper to feed off midfielders and spread the ball out the wings.

That starting eleven has more than enough to record a comfortable victory over Paul Lambert's side, but we usually don't make things easy for ourselves.

A repeat of Cissé world-class finish to finish the tie would be more than welcome, as would a nice opener from Demba Ba, but we'll take a victory any way we can!

Obviously it's sickening to hear of Ryan Taylor's knee injury as he was an integral squad member, but it gives chance to the younger lads to stake their claim as first choice back-up. Shane Ferguson could get a fair amount of playing time in the coming weeks, and there's no harm in that.

All in all, quite frankly I expect a win, but with Villa looking to break their duck, it probably won't be as easy as some people might think.

SJP has to become a fortress this season yet again, and hopefully tomorrow evening we'll continue our 100% record on Tyneside this season.

Your predictions are very welcome in the comments area (both Villa fans too).