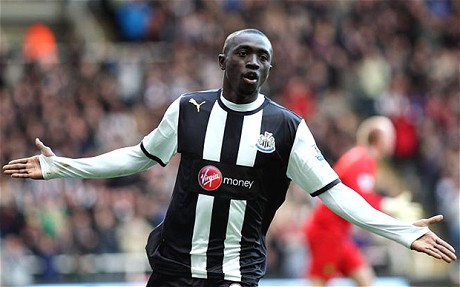 No one could quite believe their eyes from January onwards last season as Newcastle United's latest addition - Papiss Cissé - began scoring the most ridiculous of goals the Premier League is likely to see for some time. He notched up double figures in Black and White despite only arriving at the end of the season and almost all his goals oozed utter class. A born finisher. A natural goalscorer. There's isn't much Papiss doesn't have in his locker - he just really is a ridiculously good forward. But we knew this when he played with Freiburg anyway, he just couldn't stop scoring. The best thing about it all is the fact he cost about a quarter of what we sold Andy Carroll for. Not bad business, eh?

The start of the 2012/13 season was always going to spring some questions. Cissé has been relatively quiet so far, but of course he is only getting back to where he wants to be following the Ramadan. A few days ago Cissé scored quite a wonderful headed effort in a game between Cheick Tioté's Ivory Coast and Senegal - indeed a second leg that NUFC's eyes will be watching very closely.

Last season with both Ba and Cissé in the side, we played a formation similar to this: 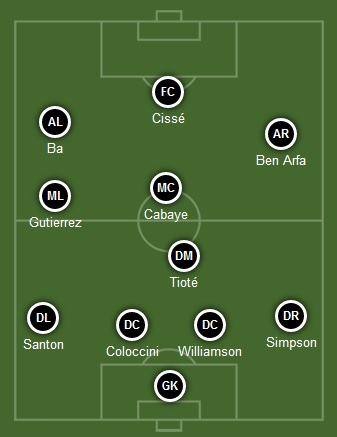 Gutierrez and Ba we were extremely dangerous up the left, while at the same time Jonas offered a defensive quality to his game by often helping out a settling Davide Santon at LB. With Benny down the wing troubling any opposition LB and with the ability to feed a potent Papiss - teams didn't fancy lining out against us, especially at St.James’ Park.

This season, however, we seemed to have returned to a normal 442 formation accommodating Cissé and Ba in CF position. Benny on the right and Guti on the left with Cabaye & Anita/Tioté in center mid.

Now, I know it's very early stages of the season just yet and we needn't worry too much, especially about Papiss, he'll start banging them in any game now.

My question however, is whether playing Demba Ba up front instead of wing forward like last season, affecting Papiss a little bit?

Cissé thrived as a lone forward, part of a three-pronged attack and it seems as if that 433 formation has been put on the back burner for the moment.

Saying that, I do expect us to return to a very attacking shape soon. It's just a little hard to keep both the Senegalese men happy up top.

Also, Cabaye is still recovering from a Euro 2012 hangover and Tioté is injured so we don't really have an iron wall in midfield at the moment, although Anita and indeed Bigirimana are proving more than suitable both in CM and in Vurnon's case - RB.

In time things will work out fine, I'm sure of it, but I'd like you get your opinions on the matter. At the end of the day, is pleasing Ba stopping Cissé from playing his ideal game?

One last thing - the Premier League returns this weekend and with that, Fantasy Football managers will be gearing up their teams for a lengthy weekend of football. While almost all people play the official Premier League fantasy league game, there is an alternative out there that has something that the big boys don't.

With a special transfer system ahead of its time, take a look at ProSportex Fantasy Football and give a go. It takes a few mins to register and you might like it. We certainly did.