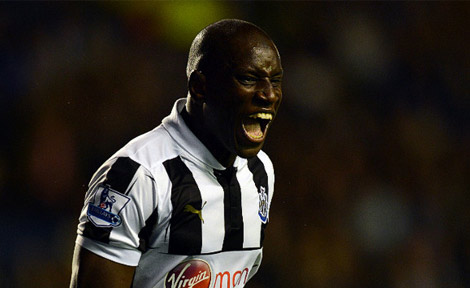 There's usually no better feeling in football than scoring in the dying seconds to achieve a result that looked virtually impossible. When Victor Anichebe powered home Everton's second goal, it looked as if they were on course to take a deserved three points on an emotional night at Goodison. Unfortunately for Moyes’ men, they hadn't read the script. The other substitute of the night, Demba Ba, wasn't finished just and thanks to a chest-on from Shola Ameobi - the Senegalese man prodded home a priceless equaliser to make it 2-2. Pulsating stuff.

Of course, having Demba Ba on the bench from the start raised many eyebrows and even suggested that there might have been an argument between himself and Mr.Pardew. With a forward line of Marveaux, Ben Arfa and Cissé - Ba was left out but purely for tactical reasons.

Fair enough Cissé - unlike Ba - hasn't scored so far this season, but I can't say I was too shocked by Demba's omission in the starting eleven, were you? Going to Everton and grabbing a result is an extremely tough ask as we have seen throughout the years.

The physicality and dominance of the home team is often too much for visiting sides and ultimately - Goodison is very much a stomping ground for the blue side of Liverpool. This season in particular, you can expect a strong Everton challenge for the Top 5.

Per usual though, the media are intensively linking Demba with a move away from St.James’ Park. The much talked about release clause that was supposed to expire on the September the 1st seems to be reactivated in January, meaning the forward could leave for £7.5m in the New Year if any bigger teams come calling.

However, despite the enticing price tag - which actually didn't attract anyone enough into bidding the £7.5m through the course of the whole summer - it is clear that Demba Ba wants to stay at Newcastle United. His agent(s) however, would love to grab one final big money deal for themselves and with that, they have absolutely no respect for the club or the manager.

The relationship works both ways though.

There's no animosity between Pardew and Ba - let's get that straight. There is however, the matter of Ba's agents wanting another payday, and they've been nothing but trouble since his move to Tyneside. The modern game though, eh?

Two options lay on the table. Either Ba departs, or he gets new agents. The latter would be in the best interest of both parties because it's very unlikely any teams will pay a 27-year-old, with previous knee problems - £100,000 a week.

We shouldn't really even have to be talking about this though as Ba has said absolutely nothing about wanting to leave. He probably has mentioned that he's frustrated with not being allowed to play his optimum game to his agent, but of course as an agent in 2012 - he'll take that as a desire to leave. What nonsense.

Anyway, if you're ever in doubt whether he is happy at NUFC or not, I'll leave you with these:

Here's hoping for three points against Norwich, and a rapturous reception for the hero that is Chrissy Hughton!