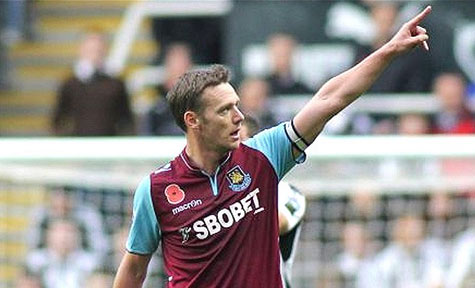 There are a lot of Newcastle United fans overreacting right now, following a disappointing defeat to West Ham United. However, to say that Newcastle United performed quite miserably today would be a slight understatement. Up against old boys Kevin Nolan and Andy Carroll, it was almost written in the script that one of them would net against us, but to grab the three points is another matter.

In quite a sluggish first half, neither side showed much ambition to be fair. Newcastle tried to release Ben Arfa on countless occasions and despite all his classy dribbling, and checking in and out, no one looked for the ball. Moves broke down, far too frequently. In the end, our hesitancy and lack of fluidity gave West Ham to the ability to change the pace of the game to their liking, and as we know: Kevin Nolan netted a very characteristic poacher's effort inside the six yard box.

The second half didn't get much better. We swapped an ineffective Cissé for Shola Ameobi, to no avail.

Demba Ba did have a header that one my first thoughts crossed the line, but it wasn't given and you just knew from then on that it wasn't going to be our day.

Anita's arrival early in the first half for an injured Jonas Gutierrez was completely anonymous as Diamé dominated against his smaller opponent in the the middle of the park.

Gabriel Obertan was also introduced for Danny Simpson, but the Frenchman just didn't get going - opting - most times - to cut inside, rather than take his opponent on down the wings which he would have had more success with.

Here's a quick mock-up of how NUFC lined up, from the starting line-up to the final whistle.

Obviously Danny Simpson is at RB when Obertan came on, but you should be able to make sense of it. 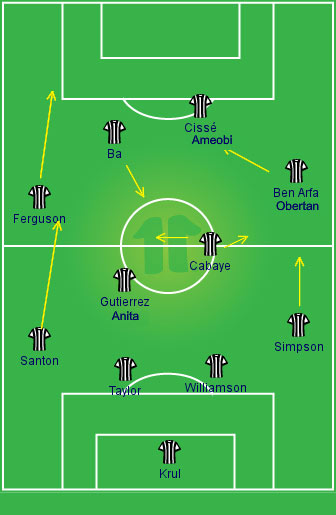 For me, those are the two stats that caught my eye after the game. Sam Allardyce's side are renowned for lumping the ball forward rather than trying to play football on the deck, but today, they actually made more passes than Newcastle United. Rather than being a testament to WHFC who probably aren't as bad to watch as some make out to be, the stat shows how bad NUFC actually were today.

Posession-wise we had more of the ball, but as you can see both from the passing stats and more importantly: the scoreline, we did very little with it.

Corners are another matter that need sorting out. We received 11 corners in today's game and I don't remember creating one decent chance from one of them. In my view, every team should be at least scoring one goal per ten corners, especially when you have quite a bit of height in your team (Williamson, Taylor, Ba, Ameobi, Obertan).

We really need to sort it out.

Why not have a near post delivery which Ba/Williamson can meet with his head? It worked away at Wolves last season, and since then I'm not sure if we've actually scored any other goals from corners?

I do remember however, Ameobi dominating from corners away at Chelsea in the cup when under the leadership of Chris Hughton - so clearly we have the ability in the team to reap rewards from a decent delivery.

Plus, we all know that Cabaye is capable of an excellent delivery - however, we are yet to see it from a corner. I wouldn't bet on us scoring any time soon from corners.

Conclusion to the defeat:

We weren't good enough today and it's as simple as that.

Midfield: Our midfield was pretty much overrun for the majority of the game, and aerially, we lost out, which to be fair is hardly a surprise.

Distribution: Tim Krul consistently lumped high balls forward to Ba & Cissé/Ameobi. Against a back line of Winston Reid and James Tomkins, you're not going to have much luck regardless of who you are.

Lack of Urgency: I don't think I'm the only one who feels we lacked urgency today. Fair enough Anita, Krul, Taylor, Ameobi, and perhaps even Obertan felt a little tired from the European encounter in Brugge, but it's not as if they traveled to South America or the likes. Ben Arfa did try to excite, but was well-marked and things just didn't come together for him today.

Even in the final 5 minutes however, it took us until half-way through injury time before we threw men forward, including Tim Krul.

Mind you, I thought Krul was going to get his head to that cross of Benny's! What an equaliser that would have been!

We missed: Fabricio Coloccini badly as well as James Perch.

All in all, a disappointing defeat. Added to that, a nasty injury to Jonas which we are still to learn the full extent of. Hope it isn't too bad.

It was just one of those days for us today, we just need to move onwards an upwards. A little bit of improvement in the set-piece department would be ideal though, as it could be the difference between us losing, drawing, or even winning a game in the future.

Man Of The Match: Kevin Nolan - Played very well today and got the winning goal. Fair play to him for not celebrating his usual chicken dance too. Deserved his goal, and the three points.