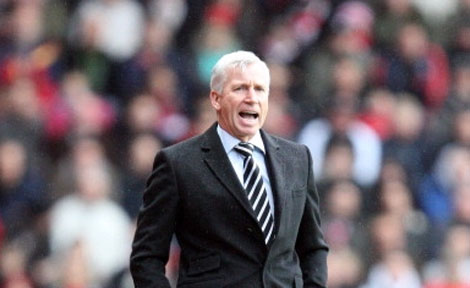 As I am sure you know by now if you have read my blog for any considerable length of time; I'm probably one of the most optimistic Newcastle United supporters you'll met. Optimistic, not unrealistic. However, today's performance away at newly promoted Southampton was nothing less than depressing even for the most hopeful of us. We were truly atrocious. In fact, I have never seen such a poor performance since the season we were relegated back in 2009, but the less we talk about that, the better. I find it quite funny the sudden change in morale at a club, from supporters all the way to the players on the pitch after a positive result. Southampton's away win at ailing Queens Park Rangers had them going into today's encounter against us in great spirits and from the first whistle, you had the feeling there was only going to be one outcome. Sadly, those feelings were proven true.

Two goals from Adam Lallana and Gaston Ramiréz either side of the break helped the Premier League's new boys a second win on the go, and picking up such momentum as we come into Christmas is imperative if Adkin's side want to remain in the top flight.

Today, we made Southampton look as they were an established Premier League team, and as if St.Mary's was their fortress where few teams came and actually walked away with anything.

Sadly, it is true. Our ball retention was absolutely woeful. Yet, despite after 33 times of trying the long-ball up to an isolated Demba Ba, we still continued to hoof it, quite literally, right back the opposition.

Sometimes I actually wonder how such professional footballers can be so brain-dead in their approach to a pass, it never ceases to amaze me. Danny Simpson was a perfect example of this today. Clearly NUFC is second on his mind at the minute, and his performances reflect it. Without being too harsh on the lad, he's one of the, if not the, weak-link in our team. We are vulnerable with him at full-back.

Less moaning though, and more analysis.

As far as possession went, purely because the little period we had where Southampton took it easy, it was 50-50 at FT.

Southampton managed 18 attempts at goal compared to our measly 8, of which only 3 found the target. Appalling.

As well as that, we somehow managed to record 6 offsides which is pretty dreadful considering I really cannot remember any particular stage of the match where I found myself expecting us to hit the net before hearing the whistle.

Passing-wise we made a total of 329, 12 less than Southampton's 341, with a surprising 70.7% passing accuracy on our behalf. That is the one stat that really staggers me today, as I can remember countless misplaced balls here, there and everywhere.

Stats aren't everything though, and despite the fact that they usually reflect how a game went - the figures above are probably a little too complimentary of the way we played. It makes us look like we took part in a game this evening, which we all know is far from the truth.

Being honest, injuries have killed us, along the European distraction which to our credit we have taken well and progressed to the next round rather comfortably.

Ben Arfa's trickery and unpredictable surges through midfield would have caused Southampton problems, while Coloccini I'm sure would have organised our back four a little better. At least Colo's presence would have meant Mike Williamson wouldn't have been anywhere near the starting eleven, but we weren't that lucky today.

Yohan Cabaye on the other-hand would have controlled midfield more appropriately, and could have dictated the pace of the game at various times. Clearly himself and Tioté are our best central midfield pairing and unfortunately, we have only managed to have them in the starting 11 a handful of times this season. A mere 3 times if I remember correctly.

Amway, rather than rambling on I'll finish up.

Credit to Southampton all the same, it's a big win for them towards their survival hopes, but in fairness we made it relatively easy for them.

We need a return to the formation that saw us score plenty of goals last season. Ben Arfa & Ba on the wings with Cissé up front; Cabaye/Gutierrez/Tioté holding in behind. It's time to sacrifice Demba Ba's wishes for the better of the team. Change back to the diverse system we had and get Cissé firing - he hasn't had chance to showcase his potent finishing all season.

Unfortunately, Steven Taylor took a knock today and could miss the Stoke City game on Wednesday. When it rains, it pours and all that.

Newcastle United's best player today: Davide Santon. Almost got his first goal in Black & White with a fine header. All round play was quality, but not helped by tired legs, and disenchanted figures around him.

What do you folks think? What do we need to do to get these talented bunch of players firing again?

Feel free to follow us on Twitter @TyneTime or if you fancy following the actual me for everything football then shoot over to @KevinDoocey.