Newcastle United v FC Metalist Kharkiv – What can we expect? 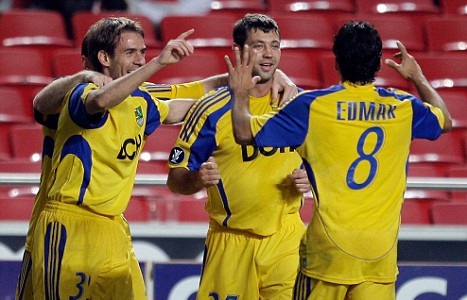 One would almost forget about Newcastle United's European campaign as Pardew's men attempt to stave off the threat of relegation, but on Thursday, Ukranian outfit Metalist Kharkiv visit St.James’ Park in first leg of the knockout phases of the Europa League. Metalist have been on vacation following a winter break and their European adventure is likely to be a priority for them as they sit snug in fourth spot in their domestic league. NUFC on the other-hand linger in 16th, and could do without such cup runs if I'm being honest . Regardless, a spot in the Europa league marked a success last season and on Thursday, the lads will be hoping to continue an unbeaten record at home in Europe stemming back to 2005. The real question is what to expect from the Ukranians?

Unfortunately, I can admit I know very, very little about the team we are to face at St.James’ Park. I have watched their leading goalscorer Jonathan Cristaldo in action once of twice and he is pretty lively, but besides that, I do not have much knowledge of the rest of their team. Needless to say, they are in the Europa League on merit and they'll be looking to oust us on Tyneside to set themselves up nicely for the second leg.

I would expect Alan Pardew to field a pretty solid starting eleven, but whether he will risk the likes of Cabaye, Sissoko or Steven Taylor is unknown. The last thing we want is a couple of injuries heading into a crucial Premier League period. Massadio Haidara could well start in order to give Santon a much needed rest and perhaps even Danny Simpson might feature after returning from a broken toe.

Gabriel Obertan will most almost certainly play a part if he is deemed fit enough, which would be good to see. The Frenchman needs more playing time, alongside many more of the fringe players at Newcastle United. Saying that, we have to be positive about the game; we have to look to score early and try grab a nice lead ahead of the return tie in far flung Ukraine.

Regards Metalist, if there is two things I have noticed about them, it is that their midfield consists of rather elder midfielders, and secondly, they have a host of Argentinian players - none less than Cristaldo as mentioned above. They are likely to be a very decent side that will work hard when not on the ball and look to counter when they do receive possession. If one was to place a bet - Newcastle United are currently hovering around the 2.14 mark, with Metalist available at 3.20 or thereabouts.

It's a little hard to guess which way this tie will go, but NUFC most certainly need to win for the first leg. The referee for the night is Tom Harald Hagen, a quite young Norwegian and he might play a big part in deciding what result we get on Thursday!

As far as injuries go, thankfully Gouffran did not suffer a leg break and is likely to back in contention for the Southampton game, and such a European fixture will give Pardew a chance to give Mapou Yanga-Mbiwa a home baptism.

Comments welcome as always - anyone know/watch Metalist Kharkiv by any chance? Shoot us your thoughts in the thread below.