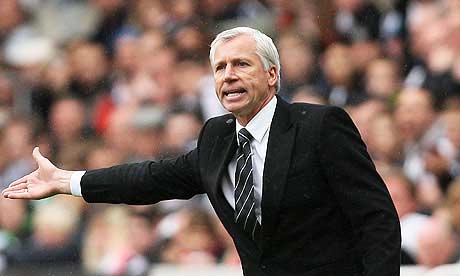 As most of might have expected, Metalist Kharkiv proved a pretty tricky test with Shola Ameobi settling the tie with a second leg penalty half an hour before full-time. There had been plenty talk about extra time and penalties up until KO, and it looked very much as if such predictions were not too far off the mark. However, Shola stepped up to brilliantly slot away yet another European goal for himself, and ensure a last 16 tie against Russian outfit Anzhi Makhachkala. On Sunday however, we will face an entirely different test, one which bears more importance than our escapades in the Ukraine. Mauricio Pochettino's Saints visit St.James’ hoping to distance themselves even further from the dreaded relegation zone, while Pardew will be hoping to restore a sizeable gap between the Magpies and the doomed.

I'm not going to lie - I am pretty nervous about this game. Tim Krul has been ruled out with a nasty ankle strain and Yohan Cabaye is going to be closely monitored up until KO just to make sure his knee did not suffer any damage.

It seemed ridiculous to sack Nigel Adkins on Southampton's part a month ago, not only did it put the club's Premier League status at further risk but also the appointment of a manager who could not speak any English seemed like a double dose. Some Premier Leagues are backed by wealthy oil tycoons, other clubs are backed-up by big gaming companies but Southampton have an owner who made his money in the construction industry and it seems he was pretty concrete about having an Argentinian in charge of the final few Premier League games. (See what I did there?..)

With that said, Sunday's game is going to be a test. The Saints are on the back of a great win against current Premier League champions Manchester City and have shown a real tenacity in their other games even since Pochettino joined, so perhaps such a decision to appoint him might not have been so daft after all.

I don't think the importance of this game is actually that clear to fans of both sides. A loss for NUFC would see us right back in the mire with only a handful of games left in the league while a defeat for Southampton could well start a little rot that has been the Achilles heel of many a Premier League team.

If Moussa Sissoko is given freedom in the middle of the park then I think we are in for an exciting game, but our full-backs will have a lot of work on their hands controlling Jason Puncheon and indeed the likes of Gaston Ramirez. Needless to say Steven Taylor will need to be on his toes to keep tabs on Rickie Lambert who is likely to relish a playing opportunity at St.James’ Park. Unfortunately, it seems as if Hatem Ben Arfa will not play much of a part, unless things change between now and Sunday.

It really is a game I cannot call. We need an early goal and we need to seal a result before the final twenty minutes. Easier said than done for sure, but maybe, just maybe Papiss Cissé will stay onside and slow a few home to help us up the table?

We're in for a tough fixture folks, how do you think we are going to fare out?