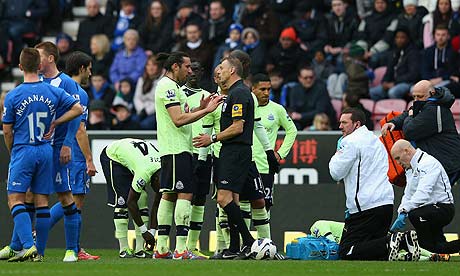 When Massadio Haidara darted in from the wing and was tackled by Callum McManaman, you could hear a roar of pain from the Frenchman as soon as they collided. Any football fan watching knew something serious had happened, because as much diving that exists in the modern game, few ‘simulators’ will wince in such pain to gain a free kick. Such a reaction was natural, and that was proven when the new LB was stretchered off with a serious looking injury. From the news we have, early signs are not very good. It seems as if Massadio has ruptured ligaments in his knee, along with a possible thigh strain/tear that will most definitely keep him out for the rest of the season, and perhaps even until December 2013. You have to feel for the young lad who was enjoying the start he made to life on Tyneside arriving only in January as part of a French legion that is helping NUFC find its feet again.

Trips to Wigan Athletic are never easy, in fact we have won only once on our travels to the barren landscape. It was Shola Ameobi two seasons ago who scrambled home the only goal of the game to hand us our first victory there, but since we have lost both our away games including a 0-4 humiliation when we were in hunt of Champions League football last season.

We always seem to make the trip to Wigan when they are about to gear up for a relegation scrap, and yesterday was no different.

However, yesterday's defeat was more damning on the injuries front than it was on the scoreline. We lost to full-backs, Mathieu Debuchy and Haidara to injuries. One avoidable, the other not quite.

It has been quite a while since I felt so livid at full-time. Not only did Wigan deserve to be down to ten men for the majority of the game, but their winner involved a clear Maradona-like handball in the build up. Mark Halsey missed both of the incidents in typical fashion to cap one of the worst referee performances I have ever witnessed in my time watching football.

What did we learn from the game though?

We here at TyneTime have always been fans of Marveaux, and you might notice that back in January we wrote about how we couldn't afford to lose the Frenchman as a part of a potential Rémy deal. Thankfully the move did not materialise and through injuries and what-else, Sylvain has become an integral creative force in our team.

He is of similar mould to Ben Arfa, with a burst of pace, buckets of flair, and a vision that can turn a game on its head - just like we seen against Stoke a week ago, and indeed our last gasp win over Anzhi midweek, both of which Sylvain assisted winners in.

Keep this guy fit and we'll do OK.

They have battled relegation for the last three seasons and each time managed to avoid it, but chance can not always stay in your favour. This season, every Newcastle United fan hopes Wigan are in the bottom three come the final whistle on the last of the season.

Wigan do not deserve to be in the Premier League in all reality especially with supporters that give a standing ovation to a youngster that committed a career ending challenge on a Newcastle United player.

Never do the club fill their rugby stadium and rarely do they bring any decent amount of supporters with them on the road. In fact, it is hard to see how such a club actually exist in the Premier League. Dare I say even the crew up the road on Wearside represent more of a football club than the Latics.

When Papiss Cissé lofted a ball into the path of Davide Santon and the full-back finished it off like a classic Italian CF, the away fans bezerk. You could see what the goal meant to the travelling support, I swear there was a higher decibel level when Santon scored than either of Wigan's two scrappy efforts.

The fans of NUFC are a credit to the club, indeed they are the club. I would love to follow the lads up a down the country (and Europe!), but living in Ireland can prove a bit of a restriction! As far as achievements go, there are few clubs in the country that match the passion of Newcastle United fans.

Dave Whelan has come out today claiming McManaman's challenge was a fair one and that he got the ball. We all Whelan to be a bit of a spoofer, but his comments are beyond ridiculous especially considering his own career was ended by a serious injury. I would suspect there is an underlying tone to his comments though, and it may something to do with the fact Newcastle United owner Mike Ashley actually gained control of Whelan's company JJB Sports not too long ago.

Not only did he lose his company, but there is quite a good chance that his club will lose their Premier League status. I know I'll be checking footballscores.com on the last day of the season to see who takes the plunge! An own goal from Callum McManaman on the final to send them down, that would make good Karma wouldn't it,?..