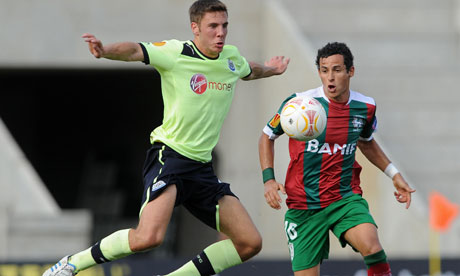 I remember the day Dan Gosling arrived at Newcastle United. We had managed to secure him on a free transfer from Everton after the Merseyside outfit failed to negotiate a new contract. Gosling arrived with potential, a decent passing range and even the odd goal - who can forget his 120th minute winner against Liverpool in the cup only a few years ago?! However since his arrival, injuries have hampered every opportunity he managed to get. I'm not actually the exact injury he is carrying or has been carrying for quite a while, but I believe it is something to do with his right knee. Many of you might actually forget, but Gosling scored for NUFC last season in our 1-3 away defeat to Manchester City. It was a phenomenal finish too, worth checking up (!). With Cabaye, Sissoko, Jonas, Benny, Perch, Bigirimana, Anita to name but a few, what does the future hold for Dan?

Gosling real potential as a midfielder is unknown, quite frankly because he has never had proper season in the top flight. From what I've managed to see of him he looks a tidy enough player, but fitness is quite obviously a problem. He doesn't really strike me as a starter in the NUFC team, because he does not match up with the likes of Cabaye or Sissoko physically or technically.

However, that isn't to say he can't do a job for us. He is likely to fulfill a similar role to James Perch: a squad member. Whether Gosling would be willing to settle for that or not is another thing, but he could do a job in our midfield given the chance I have no doubt. The biggest question though, is whether NUFC will elect to keep him in the summer.

It is going to be a busy summer for Newcastle United and Gosling could be one of at least four players that will be shown the door unless they can impress from now until the end of the season. His appearances on the bench in our recent games is encouraging however, and perhaps Pardew has plans for the former Plymouth Argyle player.

One thing is for sure - Dan Gosling will soon find out his future at St.James’ Park.