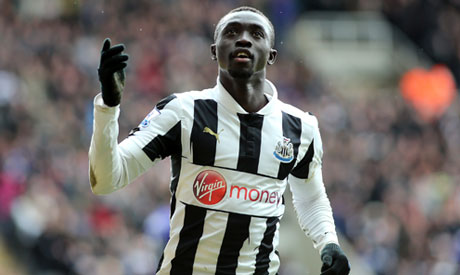 When Newcastle United began their European adventure away in sunny Greece against Atromitos, not too many would have guessed that just months later the north east giants would be a stones throw away from a European semi-final. Having dispatched of the Greek outfit at home, we were then handed a hardish group but excelled when we needed to without flexing our muscles that much. Then came Metalist Kharkiv which Shola decided to sort out in Ukraine on his own. Moneybags Anzhi soon followed and Papiss Cissé put paid to the Russian's chances in the second leg at home in the 93rd minute, having recorded a solid 0-0 draw away from home.

So here we are. 11th of April 2013, Newcastle United ready themselves for a home tie with Champions League dropouts Benfica with the aim of overturning a 1-3 deficit from the first leg. No one every said it was going to be easy, but it was just so sickening to shoot ourselves in the foot at the Estádio da Luz. Cissé should have scored a hattrick while Steven Taylor and Davide Santon did not cover themselves in glory by gifting the Portuguese side two of their three goals.

Regardless, at 8.05 St.James’ Park will be full to the brim, the famous Tyneside chants will fill the already anxious air and the lads will try their best to grab an early goal or two to set the wheels in motion towards the semi-finals.

Early rumours suggest Mike Williamson will make a return to the starting line-up which is a blow to us considering Stevie Taylor has been immense in practically every game he's played since fighting his way back into the team.

Perhaps it's fate that Taylor and Santon will both miss the tie, with the two lads having cost us two goals in the first leg, but you can read into that as little or as much as you like.

The good news = Ben Arfa is back in the squad and will likely make an appearance tonight, depending on how we fare out in the first half. A quick look at the odds for the game will tell you that Newcastle United are not favourites; Benfica are expected to win the game at St.James’ Park tonight.

I can only assume such odds are reflective of the fact we do not have Debuchy, Taylor, Santon, Coloccini to call on tonight, but James Perch and co. are suitable replacements.

It is often forgotten that a 2-0 win will put us through on away goals, so we have to focus on scoring early and then bombarding them with pressure.

Benfica will not like playing St.James’ - I can assure you that, so we need to make it a nightmare experience for them from the off.

We can score a few against this side, and hopefully we will not concede any. If Mike Williamson ever wanted to redeem himself for below par performances in the past, tonight is the night should he start.

2-0 win and we're in the semi-finals of a major European footballing tournament. Inspiration much?