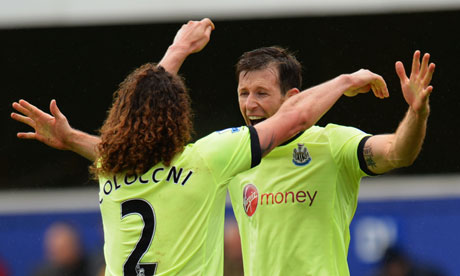 You might have noticed there has not been a huge amount of activity on this blog in the last month or so, as I have been extremely busy with college exams, but I felt today was as good a day as any to post. Goals from Hatem Ben Arfa and Yoann Gouffran helped Newcastle United to a 2-1 win over QPR and in effect, secure our status as a Premier League club for another season. Mike Ashley and Derek Llambias watched on from the stands at Loftus Road and were visibly very relieved when the final whistle sounded marking an end to a truly horrific Premier League campaign, and indeed the guarantee of tens of millions of pounds in TV rights for next season; a crucial part to this club's long term plan. I think it is fair to say that every NUFC fans is delighted this season is practically over, and the threat of relegation has ceased, but there has be change over the summer and that might involve Alan Pardew leaving his post as Magpies manager.

I'm sure you all knew where you were when Lee Probert pointed to the penalty spot following a tussle between Mahieu Debuchy and Junior Hoilett outside the box. It was no surprise to see Loic Remy step up and slot it home, playing perfectly into the sort of season we've had this year. I must admit I was stunned for about three seconds before I realised what Probert had blown his whistle for once again — a penalty which Hatem Ben Arfa dispatched in rather stunning fashion.

Then came the eventual match winner, a prod from outside the box from Gouffran following a horrendous mistake from both Jose Bosingwa and Rob Green trickled its way into the bottom corner to send the away support into raptures.

Then, per usual Pardew style, we came out in the second half as if it was the second period of a pre-season friendly - little application, and no intention of venturing forward to all but secure to the game.

We invited QPR to attack us and that they did. Andros Townsend and Remy looked lively, but only for the stalwart performances of Mike Williamson (!) and Fabricio Coloccini, the R's might have grabbed that heartbreaking equaliser that seemed imminent for so long.

There is no hiding the fact that, domestically, we have been absolutely atrocious this season. Injuries have played a significant part in the demise of the team, but a lack of fluidity amongst the team and quite frankly Pardew's tactical ineptitude almost cost this famous club a spot in next year's Premier League.

Fabricio Coloccini returned for Newcastle's last few games, and what an impact he made. He restored a calmness throughout the backline, and played with air of confidence that was reminiscent of last season's campaign. His ability to play a solid pass, read the game and set the pace from the defence outwards was something that lacked since the Southampton game, indeed a game which seemed to have sprung our season into shape only for Coloccini to suffer a broken bone in his back and create a void at the back.

I think Coloccini, alongside Hatem Ben Arfa, saved our season, and their respective performances today were the difference between us heading into the final day of the season banking on other results to stay in the division, and us entertaining a Champions League chasing Arsenal at St. James’ with absolutely no pressure attached.

Mike Ashley will call on Pardew's end of season report to deem whether the former West Ham boss has done enough to earn another year as manager of Newcastle United, but either way, next year cannot get much worse. We have no European campaign to drain our resources (players) and instead can concentrate on the league, and perhaps even a domestic cup, that FA Cup trophy would look pretty good on Tyneside wouldn't it? (Also, check out the video on the top right of this page, it shows the emotion of an underdog in the FA Cup)

A season to forget, but a summer to look forward to. No repeat of 2009 and final day of the season stuff — let's be glad of that much.

Comments welcome as always, and be sure to follow the author of this blog for anything and everything football.