Which striker do Newcastle United target this summer? 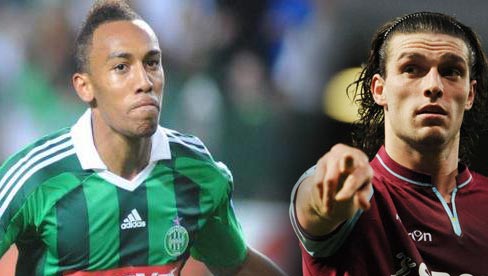 Thankfully Newcastle's win at QPR means fans of the club can already look forward to the summer transfer window with a certain relief, knowing that we'll be able to go out and buy some proper players to strengthen the squad. Five players were recruited in January, one of which scored the all-important goal to keep us in the division, Yoan Gouffran. However, there is likely to be a couple of departures in the Newcastle team, with Cabaye sought after and tentative enquiries made for a certain Fabricio Coloccini as well. If there is one place that needs strengthening, it's our forward line. Since Demba Ba departed for Chelsea, Cissé has played up top on his own, even more alienated and disconnect from midfield than before Ba's January move. The #9 has scored goals and important ones such as last minute winners against Stoke and indeed Fulham, but he needs a partner who can help him out, as well as score a few of his own. Andy Carroll has enjoyed a good season at West Ham contributing a chunk of goals and the London outfit have made no secret that they would like to take him on a permanent basis for something in the region of £14m.

However, there is one other man who is keen to be reunited with the towering forward from Newcastle, and that is Alan Pardew. I think it's quite clear that over the course of the season, Pardew employed long ball tactics, indeed tactics only a player like Carroll could play his optimum game with. As sad as it sounds, unless something drastic changes, we are likely to see some of these tactics next season as well.

Approaches have been made for Aubameyang of St. Etienne and its believed that we was rather keen on a move to Newcastle in January only to opt to stay until the end of the season. It is unlikely that the Gambian will be at the French club in the summer, and NUFC will almost definitely make a few phone calls.

Rather than get into intricate details about what each player might bring to the club, who do you, as fans want to see leading our forward line next year? Do we opt to bring Carroll back home, or do we instead look to take a talented and agile goal-scoring African to St. James’ to partner Cissé?

Also, have a look at the video at the top right of the page - it's a fan made compilation sponsored by Budweiser that gives a real look and feel to the FA Cup and what it means to be part of it all. It's a good watch so check it out 🙂

Of course, any comments are appreciated 🙂