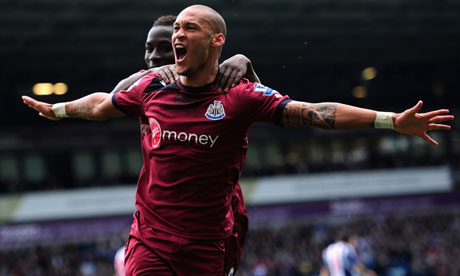 From reading across Twitter and various other Newcastle United blogs, its seems like there is a general consensus that Alan Pardew needs to spend big in order to help the club finish in the Top 10 next season. I have heard of cries for Wilfried Bony, Tom Ince, Loic Remy, Stephane Mbia, Victor Wanyama, Gary Hooper and even Shaun Maloney (Seriously?) but the truth is, we do not need to go out and throw millions at clubs. Admittedly, mistakes were made last summer in not luring enough players to Tyneside to maintain our push up the Premier League table but injuries, alongside Alan Pardew's inept tactics were our biggest enemy, in my opinion at least. In January of 2013, Yoan Gouffran, Massadio Haidara, Moussa Sissoko, Mathieu Debuchy, and Mapou Yanga-Mbiwa arrived to help save the club from relegation and they did exactly that, albeit in a tiring, effort laden fashion. However, people have to remember that these guys have to settle and gel with the team yet - something that I would like to think will be rather evident next season.

Of course we need a signing or two, but not 6 or 7 as some people have suggested. As well as that, 7 signings?! Mike Ashley would never sanction such a haul. Saying that, people are being a bit harsh on our owner. Claims of plans to pocket-money from sales of Yohan Cabaye, Tim Krul, Cheick Tioté are wide of the mark. Very wide indeed.

As things stand, Newcastle United owes its future to Mike Ashley. The man came in when the club was ridden with debts, and not very far from possible administration — and that's not an exaggeration by any means. Fair enough we got relegated but that was not helped by the obvious disarray caused by Ashley's first season in management, but by a terrible, heartless squad who happened to be full of mercenaries. *Points to Michael Owen*

As things stand, NUFC owe MA about £250m from interest free loans he has provided for the club. Now, when people say he wants to pocket the cash from sales of players, why would he? The guy is a billionaire and makes millions every week and that figure is growing by the month with his company expanding to further Eastern European countries. £20m from Krul wouldn't interest him - it's the clubs for use, and he knows that.

Now, I know I tend to write pretty long articles of late, but I'll keep this one relatively short.

There is no need for 6 new players, what we do need is a powerful striker and a cultured centre-back who can help bolster the team. I'm hopeful that Fabricio Coloccini will stay, but it is rather unlikely if truth be told.

Cabaye has been touted with a move away and if that is his wish, £20m and MA will arrange a chartered jet for him. His heart hasn't been in it since last season. However, if these guys are to leave, they need to be replaced. We have to retain the same number of players as we ended the season with, and add two more to that.

Danny Simpson is off to Italy from what I have heard so a new right-back is needed to irk James Tavernier to up the grade.

Wilfried Bony would be a good choice as he's powerful and would adapt to the Premier League in no time. A new centre-back in James Tomkins would be ideal but knowing Graham Carr he's eyeing up some Belgian playing in France.

Long story short - please do not look for 6 new players on top of the existing squad, it is not going to happen so don't get one's hopes up.