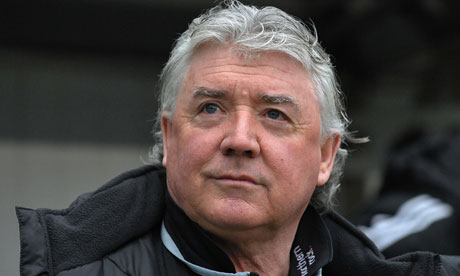 Not too many will forget Joe Kinnear's talkSPORT interview just a few weeks ago. His mispronunciation of a trio of Newcastle United players caused a stir in the media, and if believed - amongst Yohan, Hatem, and indeed Sammy too. He concluded his interview with a needless insult seemingly aimed at the fans, claiming he withholds a level of intelligence far superior than the majority of NUFC fans, although his inability to pronounce the names of some of the players would argue otherwise. Despite all of that, Joe conducted his interview and made some interesting points which most were mostly ignored as the focus seemed to be on his rather degrading comments of the Magpies faithful. Kinnear was lambasted or rather one might even say ‘Lambayzeed’ over his interview and rightly so, but the question has to be posed whether some supporters, blogs, or indeed tabloids (hardly surprising) have overreacted with the news of the appointment.

As the great George Caulkin of The Times wrote - Kinnear was one of the figureheads of arguably the most toxic season in Newcastle United's history. He was in charge of NUFC during a time of turmoil and unrest, in other words, the club was in absolute disarray, led by an erratic character who had not held a footballing position since four years previous.

His infamous rant at the media in which he swore more than once (!) will forever be remembered, but I think there was more to that particular incident than people think. For me, as well as just plain frustration and anger, Kinnear used it to direct attention away from the players who happened to be preparing for a crucial Premier League affair.

To be fair to Kinnear, I do think he would have kept the club in the Premier League, just about. However, the man feels as if we - as supporters - blame him for the sickening relegation of 2009. I speak for myself when I say that I do not hold him wholly responsible for relegation, the blame lays at the door of a certain Mike Ashley - simple as.

Anyway, as you might have heard during my appearance Tyne Time's guest appearance talkSPORT, I questioned whether Kinnear would actually have the power that he claimed he would. Mind you, I still question that. Will Ashley listen to Kinnear - a man that has been out of the game for four years - instead of Carr (no description or profile needed) when it comes to player recruitment? It's simple, Ashley will listen to Carr because the man has consistently chosen players which has gone on to double, treble, and even quadruple their value. As with everything, it will be a business decision from the owner.

The real reason Joe Kinnear has been recruited, is to act as a liaison between the owner and the managerial staff.

With Llambias a financially orientated figure, and indeed with news of his resignation, Kinnear - who has been in football a long time to be frank - will act as the footballing ‘go-between’. He will report to Ashley, with the recommendations and requests which himself, Pardew, Carr, and Charnley will compile.

It would surprise me greatly if Kinnear even wanted another job in management despite the intense rumours that he is looking to replace Pardew.

At the end of the day, JFK has been appointed to better the club's footing in the Premier League. He is exactly the man you want trying to convince Mike Ashley to part with £14m for a certain Pierre-Emerick Aubameyang, he is a rather convincing bloke love or lump it.

I am quietly confident that his appointment will work out, and that we will all look back at the rumbustious period in which NUFC endured a mini-meltdown over his three-year deal as little road bump in the club's journey to greatness. 😀

The best way to get fans back on side, or least to restore some sort of middle-ground, is to land a couple of signings in the next two weeks.

Not too much to ask from a man who can open his door to any football manager in the world surely?

Comments welcome as ever 🙂