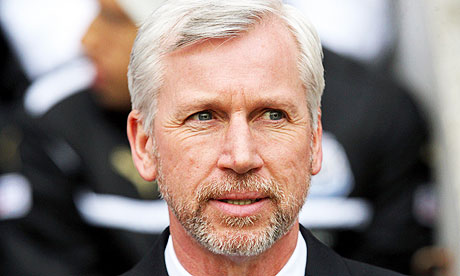 Newcastle United's Portuguese pre-season tour seems to have went pretty well in terms of preparation for the upcoming season if a whole host of Northern journalists are to be believed. Fitness levels are extremely high - a result of four hour long training sessions led by Alan Pardew in relative heat, while there seems to be a stern and focused mentality. Such results offer immense encouragement to Newcastle United fans who have grown tired of countless transfer rumours, and little end product, as of yet. Shola Ameobi scored Newcastle United's two goals in their outings against both Rio Ave and Pacos Ferreira. Make of that what you will folks. However, comments from our manager about last season sparked me into writing this very article as they quite frankly left me astounded.

The best thing about our 2011/12 Premier League in which we finished fifth, was the sheer confidence amongst both the playing staff and the supporters ahead of any tie. Whether it was Manchester United away, or Stoke City at home - fans felt prepared and assured in the knowledge that tactically we had a plan to oust our opposition.

2012/13 could not have been any different. For most of the season we looked fatigued, bereft of ideas, and quite frankly: awful.

The famous formation that saw the side scores buckets of goals and scare oppositions into submission disappeared. A winning formula was shelved. Instead, we played a long-ball game that skipped our midfield and caged any creativity from midfield that Cabaye offered.

Speaking to the ever opinionated George Caulkin at The Times Pardew looked back at the previous season and shed his thoughts on his own failings. Here are some tidbits of what he said:_

‘Maybe I tightened us up in terms of expressing ourselves,’ - going on to suggest he spent too much time on tactics

‘Got too clever’ - again, speaking about his tatical endeavours throughout the years.

The first quote is spot on and probably a nice way of putting it. Pardew turned us into an awful team to watch and restricted creativity among the talented players in our team. A big no-no for any team, not just one who looked to seal another Top 10 finish.

The most amazing thing out of his interview is the fact he thinks he got too clever with tactics and even suggested he spent too much time meddling with them.

Tactics in layman's terms are a set of plans to combat threats from the opposition. One utilises what they have in order to thwart the progression of their opponent.

The 2011/12 season was tactics at their finest. Last season was terrible, and far from clever.

How does the visible regression in our play come spending too much time with tactics? It defies logic. If he spent so much time on tactics then you would expect results, and a better brand of football. Mind boggling to say the least.

The one positive we can take from such comments are the fact Pardew realises his mistake, and that is the first step towards fixing them (reverting back to the winning shape we had two seasons ago!). The much anticipated arrival of a forward will offer another option when it comes to deciding on tactics, but let's just hope he will ditch the dinosaur methodologies and find a solid and accommodating formation for the undoubted creativity that our squad possesses.