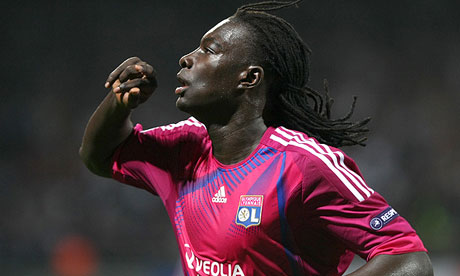 I remember when Newcastle United were chasing Bafetimbi Gomis almost five years this summer. Apparently he was available for £9m, and we were in with a good chance of landing him before the 2010 World Cup in South Africa. Instead, he moved to Lyon who this year, are doing their utmost to get rid of the Frenchman. Talks between NUFC and Lyon have gone on for weeks, and it finally seems that there is light at the end of the tunnel with the French club's president confirming that a fee had been agreed, and the player had agreed a contract. The only thing that is preventing Gomis from becoming a Newcastle United player is agent fees and we have been told that there are a number of representatives at Gomis’ camp.

According to Journal Du Dimanche in France, Lyon's president - Jean-Michel Aulas - has confirmed that a fee has been agreed between the two parties, and that the move should be completed in the next 24-48 hours. The fee in question is expected to be about £6.5m with a further £1.5m in fees over the next two years based on performances and goals scored.

It has been a difficult time for Newcastle United fans but the reason I post this article is because I'm pretty confident that the deal will go through. There had been much confusion over the state of the deal, whether a fee had been agreed or not, or whether he has accepted a contract, but now we know that the only thing that stops this deal from going through is agent fees.

Now, while agents can prove an absolute thorn in the side and they have played a major part in football becoming a soulless sport, the fact that we are dealing in Euros means that there should be no hitches with the deal. One can only hazard a guess as to the amount that each representative is looking to pocket, but if there are at least 3 involved, I'd say it is very close to the €200,000 mark, probably even more.

If one is to take a glimpse at the football fixtures today then you will know that we kick-off our campaign away against Manchester City before taking West Ham United at home - hopefully we can have Gomis and Cissé leading the line for both games and who knows, we might even nick a point at the Etihad. Wishful thinking, eh?

Either way, the deal for Bafetimbi Gomis is almost there and signing him would end our interest in Darren Bent, I'd be pretty sure of that. Negotiations over a loan deal still go on over Loic Rémy, but I'm quietly confident that we can land him alongside Gomis to bolster our forward line.

What are your thoughts folks?