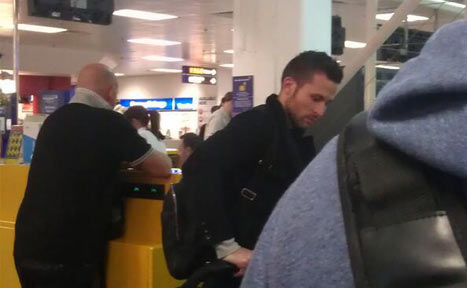 Now before any of us get ahead of ourselves - this picture could be dated. Secondly if it is indeed a picture from today as many are suggesting then Yohan Cabaye might only be heading for a short break across the sea since he has been ruled out of Newcastle United's cup clash with Cardiff City. Anyway, Tyne Time will show the news for what it is and it looks as if Cabaye is heading to France for one reason of another, his latest ‘injury’ adding to claims that the talented midfielder may well be looking to secure a move away from St. James’ Park. However, PSG his preferred destination have ruled out a move for Cabaye although manager Laurent Blanc has time and time again lauded the French midfielder's ability .

Any sane Newcastle United fan will have noticed that Cabaye's performances this season have been nothing less than immense, but quite obviously aimed towards earning a dream move to a ‘bigger’ club added to the desire to be France's main man at the upcoming World Cup.

Whatever way you look at it - Cabaye is jetting off the France. Whether that is to discuss the possibility to departing Tyneside or rather an innocent couple of days away with his family in his homeland only time will tell.

As well as that, the official enquiry made for Remy Cabella by Newcastle doesn't bode too well with this picture but it is easy to jump to conclusions under the ownership of Mike Ashley.

Stay up to date with by following myself @KevinDoocey on Twitter where this picture surfaced courtesy of @HanoiToon.