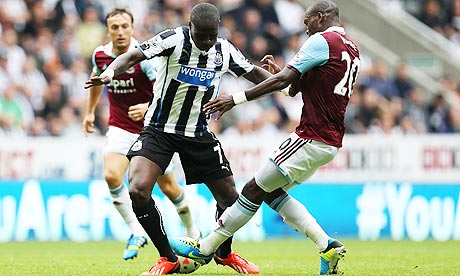 Newcastle United travel to West Ham to take on Sam Allardyce's men in a tie that could see the Magpies extend the gap from their table rivals Southampton with Mauricio Pochettino's side having only draw against Sunderland in the early kick-off. NUFC are on a poorish run of form with four losses, but such defeats included ties against Arsenal and Manchester City — two games that were very much in the balance till the dying moments, and one hindered by a disgraceful refereeing decision at a pivotal point of the game. Anyway, three points today could also see Alan Pardew's men close the gap on Manchester United above them to just one point with the reigning Premier League champions making the difficult trip to Stamford Bridge to face Chelsea. All in all, this is a very important game for us to respond and get back to winning ways. It won't be an easy tie with West Ham battling to survive the drop, but one would think that NUFC will most certainly come close to securing a victory.

Not everyone can catch a live visual of the game so Tyne Time has again decided to live-blog the entire 90 minutes so that you don't miss a beat. Every kick, shot and piece of action will automatically appear below this paragraph so you needn't even refresh the page. Sit back, enjoy, and hopefully come 5pm we'll be celebrating a comfortable win for the men in Black and White!