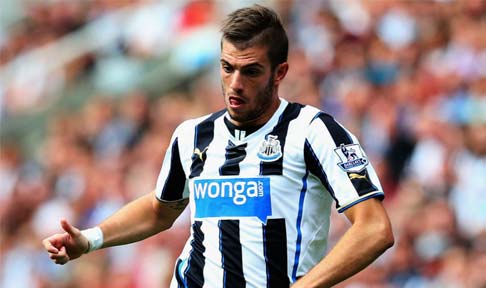 Current Chelsea manager Jose Mourinho once told reporters that one of his few regrets during his time at Inter Milan was his decision to let Davide Santon leave. The young Italian joined Newcastle United in August 2011 for a fee of £5m, and has fast become a important starter in the NUFC team. His attacking ability and technical awareness made him an ideal full-back to recruit, and replaced Jose Enrique aptly. Santon arrived with huge potential and I remember classing the buy as a major coup as I had joked during that summer that Newcastle needed someone like Davide — so when he did arrive it marked a major signing in my book. My opinion has not changed and Santon is Newcastle's first choice left-back and hopefully will be for years to come. The question is: how has he fared out in the 2013/14 campaign so far?

Here are our thoughts on the Italian's form:

Story so far: Davide has enjoyed a mixed season so far in a Newcastle United jersey. The Italian has impressed going forward and is improving on his attacking game, highlighted by the number of long-range shots that he has taken so far this season. Attacking has always been a quality of the 23 year-old and his goal away at Wigan last season showed us that he is a fairly decent finisher when given the chance.

Saying that, his preference to almost play on the wing comes at some expense and he has often left his teammates vulnerable when the opposition are on the counter. He can sometimes get caught out of position and increase the pressure on the remaining back three, but this is an aspect of the game that can only improve and I look forward to seeing him grow into the world-class full-back that he has the ability to become.

Moment of the Season: As Santon is a consistent performer it is hard to pick an individual performance but his showing against Manchester United in the famous 1-0 victory for NUFC was almost perfect. He gave little time or space to Nani and completely shut down MUFC's left side threat to help secure a big three points.

So… there is my quick review of Davide Santon so far this season. What are your thoughts on the performances of the Italian thus far? Comments in the section provided below, and make sure you give me a follow on Twitter @KevinDoocey and like Tyne Time’s Facebook page!