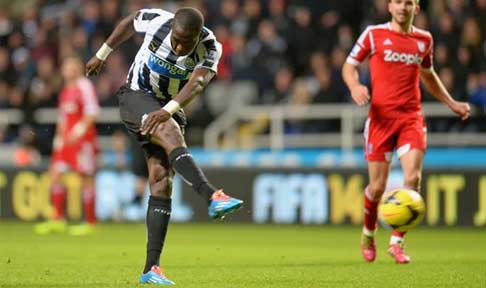 There has been few home debuts more memorable that Moussa Sissoko's against Chelsea in February 2013. Jonas Gutierrez had given NUFC a first half lead but two stunning goals from Frank Lampard and Juan Mata turned the tie in favour of the Blues. Then came Moussa to the rescue. A quick break from midfield set Yoan Gouffran behind the back four and he tried his luck with a strong left-footed effort that Petr Cech could only parry perfectly into the path of Sissoko to tap into an empty net. St. James’ Park went bezerk. However, it was to get better — a minute from full-time Davide Santon made a threatening run forward before pulling back to Sissoko who drilled a low attempt from outside the area past Cech for a second time. The Frenchman sprinted to the Newcastle bench where he was mauled by the entire Magpies squad. When the game did resume, Chelsea threw everyone forward but the might Toon held out for what was a precious win at the time.

Moussa had a dip in form as that season progressed but how is faring out so far this new campaign?

Story so far: It was always going to be hard to live up to that home debut from Sissoko, but Moussa has been consistent if nothing less. He has appeared in 22 games so far and has managed five assists which is a pretty decent showing from a midfielder of his ilk. The Frenchman has featured on the right side of midfield which isn't perhaps his strongest position. However, saying that, he does tend to maraud down the right wing to great effect, highlighted with his brilliant assist for Yohan Cabaye against Manchester United. He was also heavily involved in the intricate and quite beautiful goal Newcastle scored to make it 2-0 against West Ham last time out.

On his day not many in the Premier League players can match him. Many will remember his brilliant individual effort against West Brom earlier this season but he is an excellent team player and the fact Alan Pardew has played him so consistently proves that he is a valued member of the team. All in all, a solid season so far and we reckon he'll only get better as the year goes on.

Moment of the Season: Sissoko has had some brilliant showings so far this season. His efforts against West Ham and Crystal Palace weeks earlier showed us what a powerful and productive player he can be. Despite that, his Moment of the Season so far is without doubt that special goal to settle a tight affair against West Brom in front of the famous Gallowgate End.

So… there is my quick review of Moussa Sissoko so far this season. This ‘Midterm Report’ series will continue tomorrow when I take a look at Yohan Cabaye and Yoan Gouffran so stay tuned!