Midterm Report: The emergence of a potent Gouffran 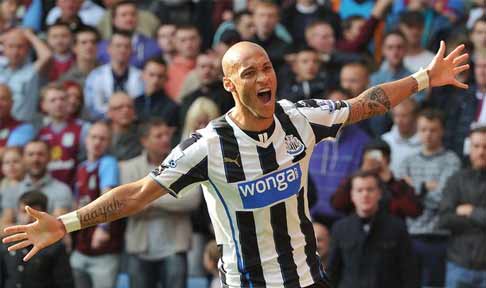 When Yoan Gouffran was linked with a move to Newcastle United this time last year, the most bizarre rumour appeared about the Frenchman. Reports from France suggested that Gouffran was allergic to grass, which worried some Newcastle fans. Later we all found out that he is allergic to certain species of trees and not grass, otherwise how would he have become a successful, professional footballer?! In January of 2013 Newcastle parted with £600,000 to land the Bordeaux forward who had impressed Alan Pardew in his performance against the Magpies in a Europa League group stage game and also happened to be in the final six months of his contract at the French club. Arriving alongside Mapou Yanga-Mbiwa, Mathieu Debuchy, Moussa Sissoko, and Massadio Haidara he arrived under the radar and considering he had cost less than a million pounds, he didn't land on Tyneside with huge expectations. He did quite well in his first season in English football and showed signs that he would prove a very important team player in the coming years.

Story so far: Gouffran has been an ever-present performer in the Newcastle side so far this side. He brings great industry playing on the left-hand side, both defensively and going forward. The Frenchman has absolutely worked his socks off in a Black and White jersey this season and has reaped his due rewards notching up no fewer than 6 goals so far this term — an impressive tally by any accounts. His positional sense and general movement in the box has been very encouraging and had been the factor in him grabbing so many goals.

His goals against Aston Villa (away), Chelsea (at home) and indeed against both West Brom and Southampton at St. James’ Park came as result of such fine movement and reading of the game. However, the best thing about Yoan is the fact he gives 110% every game, and usually leaves the field barely able to move having exerted all his energy throughout the entire 90 minutes. All in all, an excellent performer so far, and an integral part of the team.

Moment of the Season: Loic Rémy may have grabbed the headlines with his goal in Newcastle's precious victory against Tottenham at White Hart Lane earlier this season, but Gouffran's effort were just as impressive. The Frenchman ran himself ragged up and down the left flank, aiding Davide Santon in his defensive efforts as Spurs turned up the pressure in search of an equaliser. His energetic and faultless performance against what was then Andre Villas-Boas’ side sticks out as his best moment this season so far, just pipping his endeavours against Chelsea.

So that's my thoughts on Gouffran so far this campaign. Do you have anything to say about his form? Well if you do, leave a comment below and also make sure you give me a follow on Twitter @KevinDoocey & like Tyne Time’s Facebook page!

Next up I take a look at Loic Rémy and his season so far, stay tuned!