Midterm Report: Just how good has Yohan Cabaye been this season? 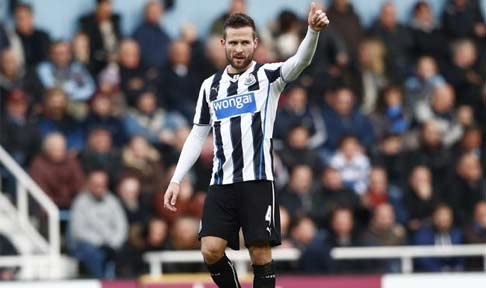 After half an hour of Newcastle United's tie against West Ham in the Premier League last Saturday, it was absolutely clear the quality of a midfielder that the club have in Yohan Cabaye. When The Frenchman was linked with a move away in the summer some Newcastle fans played down his real ability, and dubbed him as a ‘good player’ but ‘not great’, and certainly not European quality. I argued that he was one of the finest midfielders in Europe when on form and in turn asked some of the doubters why the likes of PSG and Arsenal were looking into signing him if he was - as they said - just a ‘good’ midfielder. Thankfully, Cabaye did not leave to Arsenal or the French giants, but instead has put his head down and worked for the team in a very professional manner and he deserves credit for that, regardless of whether he is playing his heart out for a bigger move or not. Many questioned , including myself, whether he would put the work in after having his head turned by Arsenal, and hopefully in the paragraphs below, I can shed light on his form of late.

So how has he fared out so far this season?

Story so far: To be quite honest, it has been a pleasure watching Yohan Cabaye in a Newcastle jersey so far this season. Towards the end of last season, the Frenchman portrayed a beleaguered figure, however this campaign he looks energised and passionate about playing again. Some of his performances have been sublime, the vision he has showed in the centre of the park to pick out Loic Rémy on countless occasions has been excellent. He has also shown great ability to score some special goals himself. Encouragingly, his corner delivery has been usually quite good this campaign as well, notching up two assists from them if memory serves me correctly.

Against the big clubs he has shown his class - at home to Liverpool, Chelsea, and even Arsenal, while his away performances have been excellent too, highlighted by his winner at Old Trafford, and indeed efforts against Crystal Palace. All in all, he has been a revelation in midfield, and one can only savour his brilliance as he might not be wearing a Newcastle jersey for much longer.

Moment of the Season: While that special goal against Manchester United will live long into the memory of Newcastle United fans and rightly so, I am obliged to pick his performance last time out in the Premier League against West Ham United as his best so far this season. The 28 year-old controlled midfield from start to finish and looked a class above the opposition. He notched up two special goals as well to cap a fantastic individual performance. Long may his form continue.

So… there is my quick review of Yohan so far this season. Do you have anything to say about Yo's form? Well if you do, leave a comment below and also make sure you give me a follow on Twitter @KevinDoocey & like Tyne Time’s Facebook page!