Newcastle United 0-3 SAFC: An honest review of the 2014 Tyne-Wear derby 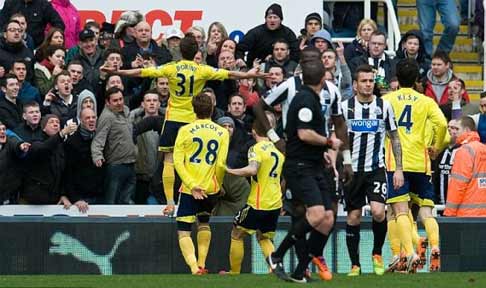 Awful. Atrocious. Abysmal. Appalling. Just four words to describe Newcastle United's performance against Sunderland in the Tyne-Wear at St.James’ Park today. Whatever about the ‘once-off’ showing the lads put in against the very same outfit a year ago - today was on par, if not worse. I can only speak for myself when I say there was a little ‘something’ missing from the build-up to the game, perhaps the disappointing transfer window dwindled the levels of optimism. Well if that hadn't, the first half hour most certainly did. You know, it looked like Pardew had fired up his starting eleven a couple of minutes in. We held the ball, and looked to shock Sunderland with an early goal. However, the visitors soon found their feet and began to pass the ball around, using the full width of the pitch. Their new signing, Liam Bridcutt, integral to their early endeavours sitting just in front of Sunderland's back four.

Then, things got bad..

Nineteen: The moment Adam Johnson collected the ball on the edge of the area I sensed troubled. Not because the man is a pretty talented performer, but because he is in exceptional form and two of our players refused to make any real attempt to challenge him. The result saw a smart lofted lay-off which Phil Bardsley ran on to before being eventually fouled by Vurnon Anita. In all fairness, it was a stonewall penalty; a mistimed challenge from the Dutchman who - once committed - knew that it was a bad idea.

The resulting penalty was struck with venom by Fabio Borini, and even though Toon keeper Tim Krul guessed the right direction, the sheer power of the effort saw him beaten. A poor start, but hardly surprising considering the previous 18 minutes.

Twenty-three: A smart turn from the burly Jozy Altidore played Jack Colback into a threatening position and courtesy of a nasty deflection which Krul did well to tip away, Adam Johnson was the right man at the right place to tap home yet another goal to add to his tally, but also convert Sunderland's second in four minutes.

Pardew's men tried to respond and did come close(ish) through Mathieu Debuchy however the ball was wheeled away from the Frenchman before he could drive one in from close range.

As the first half came to a close, it wasn't the scoreline that hurt. It was the truly awful football that the men in Black and White had put on display at a packed out St. James’ Park. Long balls, some long balls, and then more long balls. Mike Williamson pumped needless balls up to Shola Ameobi who had less touches than any of the ball-boys littered throughout the stadium.

To be completely honest - Newcastle were outplayed by a Sunderland side brimming with confidence and a team showing signs of a belief in Gus Poyet's system. The Magpies poor performance added to it culminating in a dire showing.

There was a brief period up until about the 70 minute mark when the hosts looked like getting one back, but a mix of a fear of shooting and a true lack of quality meant the period of pressure amounted to nothing. Sunderland survived and calmly rode out the mini flurry.

Eighty: As soon as Jack Colback collected the ball on the edge of the area, you knew it was in. Colback - who you might know I actually rate very highly - took it on and rooted a beauty of a strike beyond Krul into the top corner to end the tie. It was all too familiar — bearing strong similarities to David Vaughan's effort in the last Tyne-Wear.

The remaining ten minutes were disrupted by numerous intruders onto the pitch, all venting their frustration at the performance, the setup, the hierarchy, the manager, and the ambition or lack of with the powers that be at the club.

After paying good money to secure a seat at the game, thousands of fans had a right to express their opinion.

Eventually the final whistle sounded and brought an end to a truly miserable 93 minutes at St. James’ Park. The managers had a quick handshake at the end before Pardew disappeared down the tunnel. That was where I left watching and turned off, suiting really….

So there is my thoughts on the derby disaster. Outplayed, outclassed, out thought. Credit to Sunderland for their commanding performance but my word, that was one of the worst Tyne-Wear performances from NUFC that I have seen in my lifetime. It lacked heart - and the absence of that in any derby is a recipe for failure.

With all that said, it can only get better. A return to the natural passing football that saw us rise up the league table, please.