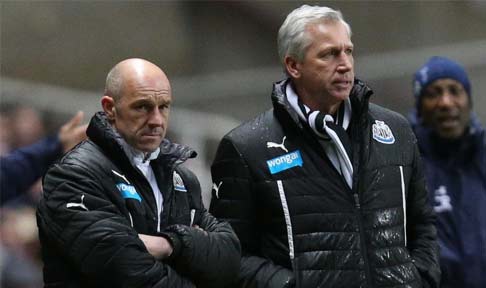 Many neutrals say that at Newcastle United, both successes and failures are exaggerated on Tyneside. Sadly enough, plenty of fans from across England believe the majority of Newcastle supporters expect a Champions League challenge each season, and a close run in the respective, domestic cups as well. While there are a minority of those fans who still believe that the club are capable of producing a campaign like that of Kevin Keegan's tenure at St. James’ Park, the vast majority know what to expect, and their expectations are reasonable. Maybe the 5th place finish two seasons ago irked such aspirations for possible Champions League football next season, but any sane fan will know that with Mike Ashley as the club's owner — this is little chance of us having a ‘right go’ at the Top 6 and pushing that little bit further in the transfer market to bolster such hopes. This was well and truly compounded by the mauling of Tottenham Hotspur on Tuesday evening.

Here are three things that we learned, or at least I did, from the 90+ minutes.

1. Steven Taylor is not good enough for Newcastle United.

To be fair, Taylor has had some excellent performances in a Newcastle United jersey over the years, but I am not convinced the guy is able for consistent Premier League football with NUFC. In the past handful of games, Taylor has not exactly covered himself in glory on the pitch. His positional sense and general decision-making at the heart of the defence has not been good at all. He might be a local lad and probably the most committed player on the pitch at any given time, but the quality is not there for him to be a regular started. Mapou Yanga-Mbiwa has to take his place from now on.

2. Hatem Ben Arfa has 12 games to save his Newcastle career.

Many of you will know I am one of Ben Arfa's biggest fans. I think he's an exceptionally talented footballer that can win a game in the flick of a switch. His close control, quick dart of pace, and a pretty powerful left foot make him a nightmare for defenders when he is on song. Unfortunately, he hasn't been on song for a while. While others say he is lazy and I would partly agree, I have witnessed an improvement in his work rate around the half way line in haggling players. However, this is not his job. Benny needs a solid midfield behind him that can do the dirty work.

Hatem could prosper playing just behind Rémy/de Jong, in the ‘pocket’ so to speak. The question is whether Pardew will acknowledge that and make such changes. I can't see it happening, but either way, the Frenchman has now until the end of the season to prove his worth in the current system, let's hope he does.

3. Certain members of the squad are already on summer break.

When Cardiff City knocked us out of the FA Cup, it meant the league was the only outlet of football for Newcastle United. No chance of silverware, and little excitement from now until the end of the season one might say. While these players are being paid to play the beautiful game, it is natural that perhaps they find it harder to motivate themselves in recent weeks. Natural, but unacceptable.

Newcastle are not going to be relegated this season unless we lose every game from now until the end of the season, but a spot in the Europa League looks out of reach too meaning that a lot of the players are likely counting down the days until gameweek 38. Davide Santon, Tim Krul, and Moussa Sissoko and just three that spring to mind.

We never make things easy at Newcastle, but surely things cannot get any worse. The side have about a week to regroup and draw a line under the current mess we find ourselves in. The good news? The real leader on Tyneside, Fabricio Coloccini, is recovering well and is near a return. Leading goalscorer Loic Rémy is also ready to come back into the team, and hey, we've still got Dan Gosling to bring on to strengthen the midfield!