Newcastle United should be keeping an eye on this English defender 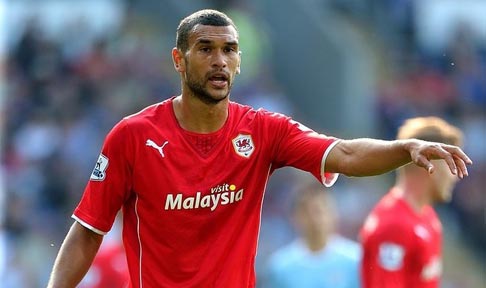 First things first, how good was it to see Papiss Cissé end his barren spell in front of goal with a fine header in stoppage time against Crystal Palace on Saturday? The #9 took his chance remarkably well given previous guilt-edge efforts at goal in the previous 92 minutes, so let's hope its the start of a scoring spree from the undoubtedly talented Senegalese forward. We are now entering the stage of the Premier League season when contenders for both the title and relegation emerge at opposite ends of the table. This season sees a handful of clubs linger just above the relegation zone with very little points difference between them - clubs as high up as Swansea are still in real danger of being dragged into a final day melee. One of the clubs that have struggled to come to terms with the Premier League is Cardiff City, and new boss Ole Gunnar Solskjaer is facing a tough task in his first gig in England to keep the Welsh outfit afloat. On Saturday the Bluebirds suffered a 3-6 defeat to Liverpool, and although the visitors stuck six goals past them, Cardiff did lead twice in the game.

Eventually however the unstoppable forward pairing that is Luis Suarez and Daniel Sturridge had their way and helped Liverpool pull away from Solskjaer's men - Suarez grabbing a hattrick in the process. Now, I'm not here to give a match report for Cardiff City v Liverpool, rather; I am focusing on one of Cardiff's shining lights this season: Steven Caulker.

Caulker left Tottenham Hotspur with the aim of playing regular first team football to merit a place in Roy Hodgson's 2014 World Cup Squad. He signed the dotted line in Wales in an £8m deal and has since gone on to net quite a few goals for the newly promoted outfit, a trait of any fine central defender.

Standing at 6ft 3′, the 22 year-old has appeared 30 times for Cardiff so far this season, and in my book at least, he should be in with a shout of making the trip to Rio. He's certainly been on par with the likes Michael Dawson, Phil Jones, and Chris Smalling this season.

Despite his good form, Cardiff are ailing in the Premier League and relegation is a real worry. They sit in 19th spot in the table and as many as five teams above them have a game in hand, with Sunderland boasting a cushion of three fixtures. City's run-in consists of ties against Stoke City, Sunderland, Southampton, ourselves and Chelsea so they will need to be on top form to pick up enough points to avoid the drop.

Should they fall back into the SkyBet Championship then I would hope that Newcastle United would enquire about the availaility of Steven Caulker. The defender fits the bill perfectly on Tyneside being young with great potential, and although he does not hail from France, I think Mike Ashley, Lee Charnley and Graham Carr could look beyond his country of birth before making a bid.

Alan Pardew has publicly stressed his desire to sign more homegrown players and for me, Caulker would be a perfect long-term addition. With Fabricio Coloccini's future rather uncertain and Steven Taylor not up to the mark at St. James’ Park anymore, Caulker would be a brilliant investment. A move would also boost Caulker's chances of an England call-up for the upcoming European Championship.

He is powerful in the air, a big threat from corners (which NUFC lack badly) and the man can play ball - just imagine how much he could improve in the presence of Coloccini, and even Williamson!

Now is the time to making plans for the summer transfer window, and for me - alongside a midfielder and a striker, Caulker should be on that list. Links with a bid for West Ham United's James Tomkins will no doubt surface come the off-season, and I would certainly welcome him to Tyneside, however, I think Caulker might be an even better option should Cardiff take the unenviable plunge to the Championship.