Southampton v Newcastle United – How will we line-up? 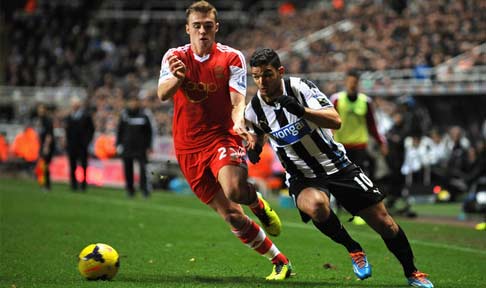 If there is one major travesty to happen between now and the summer its the possibility or rather probability of Danny Welbeck getting the nod to go to the 2014 World Cup in Brazil ahead of Southampton's Jay Rodriguez. The Manchester United man has been in pretty dire form all season in an ultimately shocking campaign for David Moyes’ men while Rodriguez has enjoyed the form of his life netting 13 goals in a spritely Southampton outfit led by the ambitious Mauricio Pochettino. The Englishman has proven a menace for defences across the division assisted by the ever-present Adam Lallana who will surely make Roy Hodgson's squad. Another man - Luke Shaw has drawn plaudits from across the league with some fine performances and it is easy to see why; the defender has the potential to become one of the best left-backs in Europe. With that all said and done, our French legion (and Alan Pardew) travel to St. Mary's on Saturday to try make amends for a torrid showing in the same venue last season.

From listening to carious sports channels/talk shows the way in which Southampton are spoke of would almost convince you that the Saints are in the running for the Premier League trophy. It is quite easy to forget that Newcastle United actually ahead of Pochettino's men by a point, an indication of the season we've managed so far.

Ahead of tomorrows game, Tyne Time is takes a look at the possible/probable Newcastle United line-up, and how John Carver can guide the men to victory without leading scorer Loic Rémy. 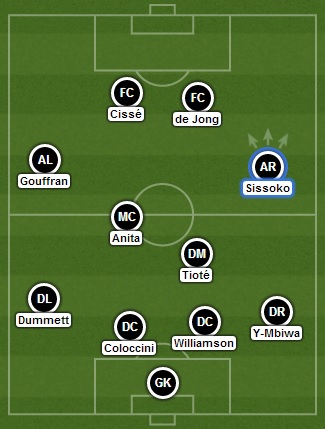 Davide Santon is regarded as ‘touch and go’ ahead of the tie against the Saints on Saturday, but I'd be pretty sure that Dummett will retain his place - it is unlikely that Santon will be rushed back into the fold, particularly against a pacy, attacking side such as Southampton.

Depending on how the first half goes, I would like to think Sissoko and Gouffran will push forward on either flank seeking delivery to de Jong. Many criticised Luuk's performance against Everton, but I do think he is quite close to his first goal - slowly but surely he is adapting to the pace of the Premier League.**

Papiss Cissé will likely look to feed off de Jong, but hopefully Sissoko/Anita can find a direct route to the Senegalese international. Sissoko is starting to play more through balls to Cissé of late, and to be fair Papiss’ movement has been excellent in the last few games - breaking beyond the back four.

Newcastle have already been handed a boost by the news that Nathaniel Clyne, Maya Yoshida, and Steven Davis will almost certainly miss the encounter, and there is news filtering through that Rodriguez will be handed a last-minute fitness check ahead of kick-off to deem his availability.

I'd be surprised if he doesn't make an appearance, though.

If NUFC are to secure an important victory then they will need to dictate the pace of the game early on. Southampton tend to put their mark on the game in the first twenty minutes and eventually tease the opposition until full-time with Lallana central to everything positive going forward. Schneiderlin - another doubt for the match - mops up in midfield providing a shield for a pretty solid back four.

Vurnon Anita will be key to Newcastle's chances tomorrow, with his quick, astute passing a much-needed feature in midfield. If Vurnon and Cheick Tioté can get control of the midfield early on, then there is every chance that the tie can swing in our favour. Yoan Gouffran's industry down the left will also be pivotal as he will need to provide cover for Dummett.

A fast start is essential tomorrow, if we get off to a sluggish start then Rob Elliot will be a very busy man in goal.

Pass it around, involve Sissoko and Gouffran and let Cissé make his off the ball runs with de Jong offering a conventional centre-forward option in the box. Providing NUFC do not show too much respect to the Saints and they keep the ball on the deck - the inevitable introduction of a certain Hatem Ben Arfa could turn the game in our favour, or seal a victory.

Also, if you can't catch the game you need not worry. Tyne Time will be providing live updates throughout the 90 minutes. Every kick, miss and tackle will be covered in our live-blog starting from 2.45 tomorrow - make sure you tune in, and don't forget to follow our Twitter @TyneTime.