Have the players given up on manager Alan Pardew? 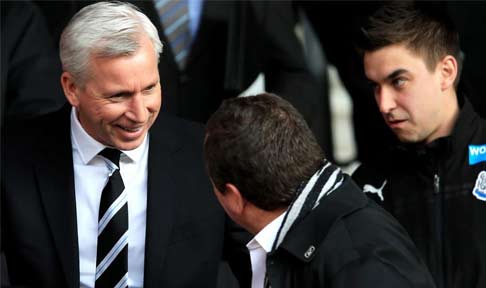 There have been a few times this season when Newcastle United have looked a Championship team at best - no less than in our latest mauling at Southampton on Saturday. The players looked clueless, disinterested and generally lazy throughout the 90+ minutes at St. Mary's, and it's not the first time such a performance has materialised. At home to Tottenham Hotspur - truth be told - a pretty awful Tottenham Hotspur showed up to stick four past Tim Krul in the Newcastle United goal and leave a packed out St. James’ Park faithful baying for blood. Even a month previous our home performance against rivals Sunderland was a complete joke. Another handful of performances throughout the season resulted in marginally less embarrassing losses, in turn, posing the question: have the current crop of Newcastle United players have lost confidence in the managerial ability of Alan Pardew?

In a recent TV appearance, Peter Lovenkrands - a fans favourite on Tyneside - claimed Alan Pardew was the best tactician he ever worked under in his footballing career. Now Pete has worked at Rangers, Schalke 04 and indeed the Danish national team, so he has played under a number of managers. However, Pardew still tops his list - something which intrigues me quite a lot.

At times in our famous 5th place finish in 2011/12 we looked tactically astute heading into games. I remember the side playing away from home, heading to clubs with a clear plan to implement throughout the course of the game. Chelsea (a) in our 2-0 victory a clear example of that. Manchester United (a) in a 1-1 draw another match in which we had a plan to stick to. Swansea (a), another 2-0 victory, showcased a masterclass in counter-attacking football.

Even against some of the lesser clubs in stadiums where it might have been easy to drop points the lads stuck to a rigid manifesto and it worked. Bolton (a), Blackburn (a), Stoke (a), Sunderland (a), West Brom (a) all resulted in victories because the players believed in what they were assigned to do. Does such a collective belief exist now? I'm not so sure.

Yesterday, the pint-sized Vurnon Anita rushing to close down Southampton's back-four, and then minutes later looking to thread a through ball for Papiss Cissé summed it all up for me. Anita is a holding midfielder that will mop-up in front of the back four and distribute smart, simple passes to the players ahead of him to begin attacks. Despite being technically the best player in the squad, it's still not his job to create the chances, and seemingly Alan Pardew is looking to push him into this role with the departure of a certain Yohan Cabaye - a travesty if ever one.

Moussa Sissoko, Papiss Cissé, Luuk de Jong, Yoan Gouffran, Mapou Yanga-Mbiwa and even Davide Santon all looked lost against Southampton yesterday. The effort wasn't there. While the Saints may have outclassed our bunch, the very least us as fans expect is 100% commitment.

In Pardew's defence he has struck gold with some tactical maneuvers this season including our home victory against Chelsea and away scalps against West Ham United, Manchester United and Hull City. The bigger picture however, is that we aren't consistent and do not look like we have a plan when we go behind in games.**

Hatem Ben Arfa, one of the most talented players to grace St. James’ Park in recent years, has not developed into a consistent performer as hoped while the once free-scoring Papiss Cissé has found it tough to buy a goal in recent months. The powerhouse that was Moussa Sissoko when he first arrived on the scene against Chelsea netting two goals can not play his optimum game on the right hand side. It's worrying to say the least.

People call it the Pardew effect and at times one can see why - some players have regressed under his stewardship.

Maybe it's the mindset amongst players that our season is practically over and there is very little left to play for, but there is a bigger issue at the fore. Do the players believe in Pardew's methodologies (whatever they happen to be!).

Come the summer when our recruitment drive starts or at least pretends to, the calibre of player that the club will look to sign will - in my opinion - go a long way in determining once and for all what sort of style/game AP wants his Newcastle United side to play. The answer awaits..