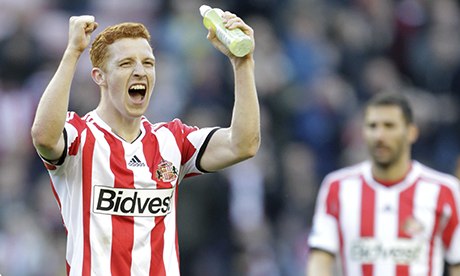 Newcastle United are already making tentative plans for the summer transfer window as the Premier League season ticks towards a conclusion with an array of names being linked with switches to St. James’ Park in the last week. Lyon's Alexandre Lacazette, Tenerife's Ayoze Perez and even Micah Richards have all been touted with a possible switch to Tyneside, but the latest name to be thrown about - and arguably the most intriguing is Jack Colback of Sunderland. Colback has been long rumoured to be a lifelong Newcastle United fan and although recent performances against the Toon and even the odd goal would suggest his allegiances lay elsewhere many feel that the 24 year-old midfielder is still Black and White at heart. Now it seems as if Graham Carr and his scouting team have earmarked him as a possible summer arrival.

Sunderland are struggling in the Premier League this season and despite taking six points off us through the course of the campaign they still remain rock bottom albeit with a couple of games in hand. Recent defeats to West Ham and Tottenham have increased the pressure on Gus Poyet's men and many Sunderland fans have already accepted relegation.

The situation with a certain Jack Colback is an interesting one. The Englishman is out of contract in the summer and has rejected the offer of an extension to his current deal some time back. With SAFC's league position in consideration, Colback is likely to look for pastures anew come the summer.

Alan Pardew looks set to continue as Newcastle manager for the foreseeable future and has reiterated his desire to bring more English players to club, with rumours that as many as five French faces could depart St. James’ at the end of the season. Mathieu Debuchy, Gabriel Obertan, Sylvain Marveaux, Mapou Yanga-Mbiwa and Hatem Ben Arfa have all been linked with moves away.

There are reports that Pardew will have a ‘sizeable’ transfer kitty to spend in the summer months and Colback's addition would not only boost the midfield count, but any move for the Killingworth born midfielder would not see a transfer fee involved - another major incentive to the Newcastle committee. Although first and foremost, if I was to have a cheeky punt on our summer transfer total spent over at Betbright.com, I'd be very surprised if it surpassed £20m. Maybe I'll be proven wrong and Mike Ashley will go gung-ho in the transfer market. Wishful thinking, eh?

Personally I actually do rate Colback - and he has always been one of very few players that I would take from the Sunderland squad. Technically he is quite good and has the fundamentals of a neat midfielder. Time and time again he has played at left-back for Poyet's men which is not his natural position - he is a midfielder that likes to take the ball and move it on quickly. He and Vurnon Anita share similar traits, and although the Dutchman is a few streets ahead in terms of his all-round game, Colback has plenty of room for development.

I'm all for signing him up on a free and I do think deep down, the 24 year-old harnesses a lot of ability. Then again, providing we do sign him - is Alan Pardew really the man to develop the player to his very best potential? I doubt it, but who knows.

So folks, what do you think - should Newcastle look to sign Jack Colback at the end of the season? Opinions, thoughts and any other musings in the comments box below please, and make sure you follow me on Twitter [@KevinDoocey](https://twitter.com/kevindoocey “kevin doocey twitter”)!