Newcastle preparing for the departure of Tim Krul 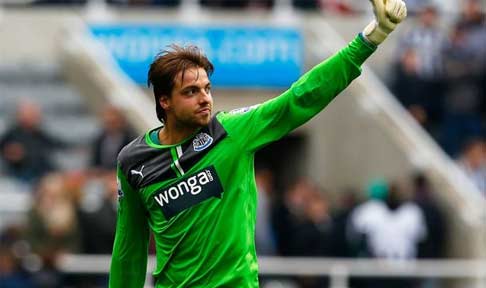 Few Newcastle United fans will forget Tim Krul's European debut against Palermo in the old UEFA Cup. A team which featured the likes of Alberto Luque and Antoine Sibierski travelled to Italy with the hope of pulling off a memorable result and they did exactly that, with Tim Krul the sole reason behind the famous victory. At just 17 years of age, Krul replaced an injured Steve Harper between the sticks and made a name for himself by contributing a handful of physic-defying saves. I will always remember the reaction of Palermo's star midfielder Fábio Simplício as he was denied in front of goal for a third time. After saving everything thrown in his direction, the referee sounded the final whistle to mark a solid 1-0 victory for Glenn Roeder's men with Alberto Luque the unlikely match-winner.

Eight, yes eight years on, a 26 year-old Krul is reportedly considering his future at the club with interest from mounting from abroad.

While Newcastle fans will give credit where credit is due, Krul has had a mixed season this campaign - and his form since the turn of the year has been poor to say the least. One has to mention his record-breaking amount of saves away at Tottenham Hotspur this season to secure yet another 1-0 victory, but overall, the Dutchman has been very average to put it mildly.

His distribution in countless games this season has been rather questionable, while a number of performances at St. James’ Park also raised questions - for me at least - whether he was completely focused on the task at hand. Sunderland's second goal in the return derby earlier year marked a very poor period of keeping as he palmed a deflected effort right into the path of the onrushing Adam Johnson rather than away from goal as required.

Even recent outings against Manchester United (h), Fulham (a), and Everton (h) beg the question would he even merit a decent money move away from Tyneside? AC Milan, Spurs, and Arsenal have all been credited with interest in the Dutchman for some time, but it is rather rich from Tim if he is looking towards the exit door after seriously under-performing this season as a whole.

While we know Newcastle will sell if the price is right - news is emanating from Scotland that Newcastle will look to sign Celtic's Fraser Forster should such a move materialise. Ironically, Forster was sold by NUFC in order to accommodate Krul and the England international is likely to go to the World Cup in Brazil. Newcastle, apparently, want to get such a deal done quickly if it is to happen.

I'd personally welcome Forster back on Tyneside as we know his quality, and the truth is, some Premier League club will take a punt on the 6'10 keeper in the near future. Either way, Forster is the reported target should Tim leave for pastures anew in the summer - not a bad contingency plan it has to be said.

What do you think about such a deal? Take to the comments section below to have your save, and make sure to follow me on Twitter.