Alan Pardew must go before NUFC regret losing this maestro 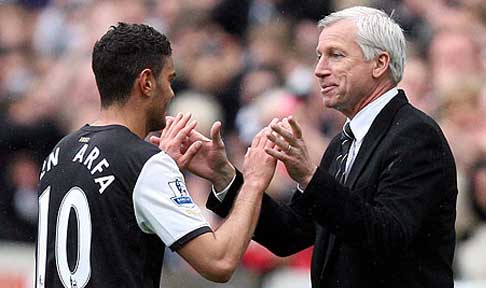 It is true what they say: players have too much power in the modern game. Extravagant wages, greedy agents, and a sense of invincibility are aspects that one can attribute to many Premier League stars of the 21st century. Often one sees a manager sacked because a number of his players do not feel he is the correct manager for the club. David Moyes’ recent departure from Manchester United was just one example of the majority of his squad failing to pull their weight throughout he season in order to have the Scot fired from his post. It's a sad state of football nowadays, but then again, there are always exceptions. The debacle between Newcastle manager and our French forward Hatem Ben Arfa is a prime example of where there needs to be a reasonable compromise for the greater of this magnificent football club. After a dire second half of a season in which Ben Arfa rarely featured, Newcastle limped to a 3-0 victory against bottom of the table Cardiff City to mark their first victory since March 22nd.

Although I could only watch from a TV screen, the atmosphere at St. James’ Park on Saturday was as toxic as I have ever seen. Countless banners, vociferous chants from a passionate faithful, and the walk-out which saw thousands leave the stadium long before full-time in protest at the current regime. The situation could be summed up in one powerful image, that of Alan Pardew being afraid to leave his bench as to not aggravate the crowd even further.

While the result may have looked convincing, the crowd were far from appeased, and it made for powerful viewing, indeed images that went across the world in making a statement of what this club really wants. Although Alan Pardew looks set to secure a Top 10 finish in line with expectations this season, the Englishman should still be relieved of his duties this summer, no doubt about that.

As many Newcastle fans would have noticed across the mediums of social media - Hatem Ben Arfa watched the game from the crowed alongside supporters, and later took to the pitch to partake in the ‘lap of appreciation’. The forward has been resigned to training outside of the first team, and his future on Tyneside - under the current stewardship - looks very grim.

It should be like this - Ben Arfa is one of the most talented players that Newcastle have had on their books for the past 15 years. His ability to split defences open at will is something the club need for next season. He offers excitement, hope, opportunity - something which Alan Pardew has failed to deploy with his desired line-ups.

While it is true that Hatem Ben Arfa can be excruciatingly frustrating to watch at times and can leave his team exposed when attacks break down, he is a player a team must compensate for. His ability to win games deserves this, and as we saw in the famous season in which we finished 5th - the Frenchman can be consistent in the right kind of setup. I emphasise setup because it has been the very thorn in our sides this season.

If - as expected - Pardew stays on as manager of Newcastle United, then we can more than likely bid farewell to Ben Arfa. Although the 27 year-old declared his desire to stay at St. James’ and help the team fight for silverware in the future, it looks like he will be flogged under the current managerial setup. That alone, is a great shame.

In on of very few cases, this is a situation where the manager should go before the player. At the end of the day, Pardew deserves the sack for not only a horrendous showing in 2014, but also because of his antics on the sideline. He is a poor image for this classy football club, and if Mike Ashley has any desire whatsoever to try appease NUFC fans he will do the honourable thing and sack him. Under the right manager, Ben Arfa could set St. James’ Park alight, yet again.

Whether you agree or disagree, comments are welcome as always folks and be sure to follow me on Twitter @KevinDoocey!