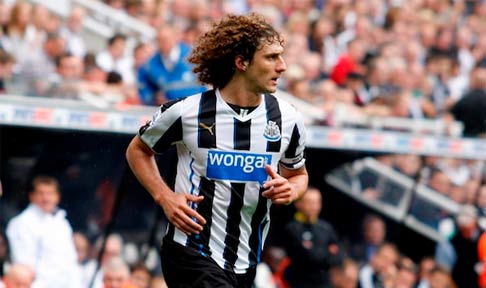 In a timely boost for all associated with Newcastle United, captain Fabricio Coloccini today confirmed that he will be staying at St. James’ Park for next season, at least. The Argentinian centre-back was widely expected to depart Tyneside for a return to his home nation, but all has been put to bed as the ball-playing defender announced to the Shields Gazette that he is already looking forward to the next campaign in a Newcastle jersey. It is worth noting that despite the undoubted positive news this represents for the club, the only team that looked to sign Fabricio, San Lorenzo, parted company with one of their employees, who also happened to be Coloccini's father; Osvaldo earlier this year. One would have to assume that any potential move to the Buenos Aires outfit is now almost definitely off as his father was a leading influence in trying to seal a move for the ex-Deportivo man.

Here is what Coloccini had to say when asked about his future:

‘For sure. I'm going to be here.’ ‘I had personal problems,’ ‘Sometimes it's tough. You have to decide between the problems and the work. Sometimes it's too difficult. Now it's finished, and next season I will be here. I'm looking forward to improving.’

‘We want the best for Newcastle United.’

Now, while his commitment may be out of necessity (lack of any forthcoming move) more than anything, it is still good to have our captain speak of his future at the club. My question is, does this signal an agreement between the club and Fabricio that represents something significant?

Two weeks ago many outlets reported discussions between Coloccini and the board, and how they guaranteed the Argentina international that there would be significant expenditure and player recruitment in the summer. While that is hard to believe, maybe Colo knows a good bit more about the plans of the club than us supporters do.

At 32 years-old, Coloccini has a couple of more years at the top level and maybe that is another reason behind his stay - he is going to enjoy the Premier League and the fine pay-packet he takes home each weekend before departing to wind down his career.