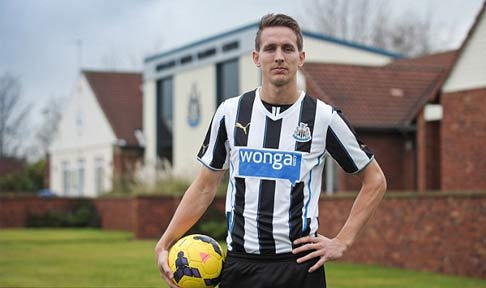 While any noise about potential arrivals on Tyneside may be welcomed by supporters, there are a few exceptions. Firstly, we want some decent talent at St. James’ Park next season in order to compete with the teams above us. As we know, and have been told numerous times - there is plenty of cash in reserve at Newcastle United ready to be spent on the ‘right’ type of player. Unfortunately, Luuk de Jong is not that type of player. The Dutchman arrived on loan from Germany with the hope of aiding our goal-threat, but the man himself has failed to net once in the handful of appearances he has managed in a Black and White shirt. He made his debut at home to Sunderland and looked off the pace which is understandable for a first game, but there has been very little to get excited about since then with the ex-Twente forward managing only one assist in his time under Alan Pardew's stewardship.

De Jong made a name for himself by netting 39 goals in almost 80 games - an impressive feat in any division. With that sterling reputation, he departed to Borussia Monchengladbach for a staggering fee of £12.6m after the German side fended off strong interest from ourselves. NUFC did not fancy splashing that sort of money on a young prospect such as Luuk and he signed the dotted line with the Bundesliga outfit, however, has experienced a nightmare career there thus far under Lucien Favre and ultimately, was shipped out on loan.

From what I have watched of de Jong in the Premier League, he does need more time to adjust to its physicality before we can see his true potential. In the times he has lined out for the club he has looked a bit clumsy and lacked any real goal threat. It seemed he was more of an intended work-horse for the other striker beside him.

In fact, to be frank, I cannot remember Luuk de Jong really testing any goalkeeper in his performances so far - maybe someone can remind me.

The local media outlets are reporting that the club will make a decision whether to sign de Jong permanently or not in the next week or so before his loan spell is up. Personally, I do not think there is much thinking to be done — he does not resemble a good investment at £8m. That money could be spent better elsewhere, preferably in helping go towards a new exciting creative midfielder.

This summer is meant to be one of major transfer activity for Newcastle United and we certainly hope that is true, however, as much as he might love to join the Toon permanently, do any NUFC fans actually believe de Jong is good enough to merit such a money move?