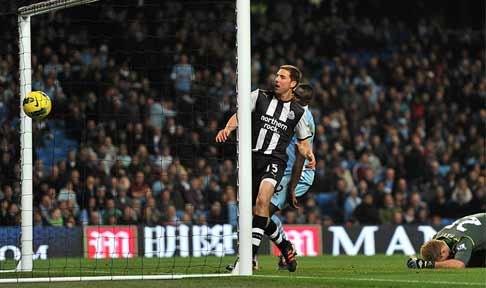 News has emerged that Dan Gosling has agreed a deal to join Championship side Bournemouth in the coming weeks after four rather unsuccessful years on Tyneside. The midfielder arrived at Newcastle with high hopes having been tipped for big things by the Everton faithful, but through injury, various managerial changes, and a tough competition for places, Gosling has resigned himself to finding first team football elsewhere. I wrote about his arrival and how it could turn out to be a great signing on a free, but alas, he has not quite turned out the talented midfielder that I thought he had the potential to become. I wouldn't say I was the only Newcastle fan hoping for a better return on investment upon his arrival, either. Anyway, in an official statement released through the official Newcastle United website, Gosling praised the club's ‘amazing fans’ before announcing his desire to do well for his new club.

We wish Gosling the best of luck at Bournemouth and you can be sure he'll be a success at the Goldsands Stadium under a very exciting manager in Eddie Howe. I'll be certainly keeping an eye on the Cherries’ result next season after a very encouraging start to life in the Championship - who knows, they might sneak a play-off spot this time next year.

Gosling's move, although predictable, marks the first of many departures from St. James’ Park this summer. It is arguably the most important summer in terms of recruitment that the club have faced in many years. The disappointing factor to take into account is that there is no ambition on behalf of the owner, so it is tough to get too excited by what might be.

What other players will be shown the door?

Steven Taylor - A passionate local lad who gave everything whilst wearing a Newcastle jersey, but ultimately, not good enough to merit first team football on Tyneside. Will likely have plenty of suitors, possibly from abroad too.

James Tavernier - Has impressed all season for Rotherham including Thursday's play-off second leg, so his future is most definitely up in the balance. I would be surprised if the Toon keep patience with him though.

Jonas Gutierrez - Did very little whilst on loan at Norwich City and couldn't help them avoid relegation. His best years are behind him and doesn't add anything to the current Newcastle setup. Alike Tayls, will have plenty of options.

Hatem Ben Arfa - One of the more disappointing cases. A player with real ability that could thrive in the right setup, however, is expected to be sold after falling foul of Alan Pardew and his tactics.

Shola Ameobi - Won't be handed a new deal at St. James’ Park to end a 14 year spell with his boyhood club. Despite lack of talent, will be remembered fondly by supporters for getting an important goal here and there.

Sylvain Marveaux - Another talented midfielder that can win a game in the flick of a switch with a clever pass, but again, has been subject to Pardew's treatment of creative individuals. A return to France will probably materialise.

Gabriel Obertan - A £2m ‘project’ from Graham Carr and the NUFC scouting team that didn't work out. It was hoped the Frenchman could be coached into an effective, pace-equipped winger, but it just didn't happen. Expect a Premier League side to snap him up.

So there are 7 players in addition to Gosling that I expect to find new clubs this summer. More worryingly, it means that major investment will be required on part of the owner to fill the vacancies, and add some real quality up front, as well as finally replacing the void left by Yohan Cabaye.

Can we sign 8 players this transfer window that will boost of squad both in numbers and quality? We'll just have to see..