Newcastle 'closing in' on Daryl Janmaat as Debuchy successor 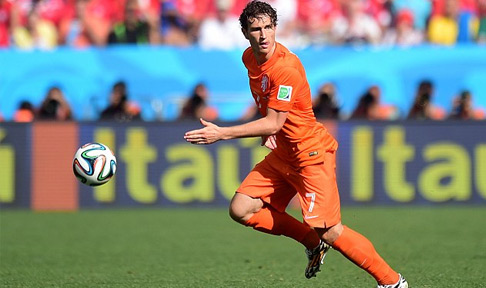 It seems almost inevitable that Mathieu Debuchy was going to leave Newcastle United in the very near future, but today there seems to have been concrete movement on part of Arsenal to bring the French international to the Emirates. Debuchy's future at St. James’ Park had been under scrutiny since January following the departure of his best friend, and Newcastle's best player, Yohan Cabaye, who left for Paris Saint Germain. While PSG are rumoured to be chasing Mathieu's signature, Arsenal seem to be in pole position, and realistically represent a better deal for the 28 year-old who is currently preparing for the World Cup Quarter Final with France in Brazil. Such speculation has been further fueled by Debuchy's decision to remove any reference to Newcastle United from his Twitter bio - a small issue, but arguably an enormous indicator of a player's future in the 21st century. The biggest news however, is that Newcastle are lining up a replacement for Debuchy, and it looks like Daryl Janmaat is the preferred option.

Janmaat is also at the 2014 World Cup preparing for a quarter-final of his own with the Netherlands, and despite rumoured interest from Manchester United, there are a number of reports emerging from his motherland that Newcastle are close to sealing a deal with Feyenoord for the right-back.

The Dutch head-coach, Louis van Gaal, who is set to take over at Manchester United when the World Cup ends has naturally been linked with a large amount of his WC squad so it is no surprise that some sections of the media claimed that Janmaat was high up his shopping list.

According to Alfredo Pedulla - a verified Twitter sports journalist, he has released an ‘exclusive’ claiming that Newcastle have stolen a march on Napoli in the pursuit of Janmaat and that a deal has been agreed. This accompanies a number of other releases from some of the Dutch media.

It wouldn't be much of a surprise to see Debuchy leave, and it's hardly mind-boggling that we have been strongly linked with a natural right-back among all the commotion on Twitter and within the news outlets (Sky Sports, BBC).

So, what do we think of Janmaat? From watching him briefly with the Netherlands at the World Cup, and indeed a couple of times for Feyenoord, I'd be happy with him as a replacement. Ideally, Serge Aurier would be the go-to target, but it seems as if PSG are tying up a deal for the Ivorian.

Only time can tell with both deals, but one things for sure - Debuchy has eyes on a move away once the WC is over.