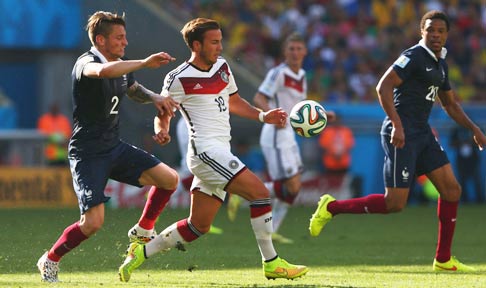 In a rather turgid affair, Germany secured a hard-fought 1-0 victory over France to progress to the semi-finals of the 2014 World Cup courtesy of a first half header from Mats Hummels. The Borussia Dortmund defender rose above Rafael Varane to brilliantly nod home the opening goal of the game, as France showed little fighting spirit to force their way back into the game. In turn, France's exit sees Mathieu Debuchy and Moussa Sissoko return home to Newcastle, but for how long is the real question. Debuchy has been strongly linked with a move to Arsenal, and it seems as if he will make a decisive choice on his club for next season when he touches back down on Tyneside. Sissoko has also been linked with a move away, and will surely have impressed many with a solid performance at the competition which saw him net against the Swiss. While much of the talk has been dominated by Arsenal's interest in Debuchy, the return home of& Les Bleus will also, fingers crossed, well and truly kick-start Newcastle's recruitment drive.

Rémy Cabella, a latecomer to the France setup, did not play one minute in Brazil, much to the disappointment of Montpellier chairman Louis Nicollin who was hoping that any performances at the World Cup would boost his price tag by at least €5-10m. Thankfully, Cabella's place on the bench throughout the tournament should mean Newcastle will be relatively unrivalled in their pursuit of the 23 year-old.

Newcastle's next signing will likely come after Debuchy departs. While there hasn't been anything concrete regards Mathieu's move away, I would be absolutely shocked if he lines out in Black and White in the Premier League come September. At 28 years of age and being on the better right-backs in Europe, you can't blame the ex-Lille man for wanting to play in the Champions League. Arsenal seems a good destination for him.

Overall, the France's exit will likely see some definitive transfer action on part of Newcastle. I would hazard a guess that it could well see one in (Cabella), one out (Debuchy) within the next 7 days.

Then if Costa Rica can continue their fine form and eliminate the Netherlands, then perhaps Daryl Janmaat could secure a move to St. James’ Park in the next week or so too - wishful thinking eh?