Is Carlos Bacca the mystery Spanish based Newcastle target? 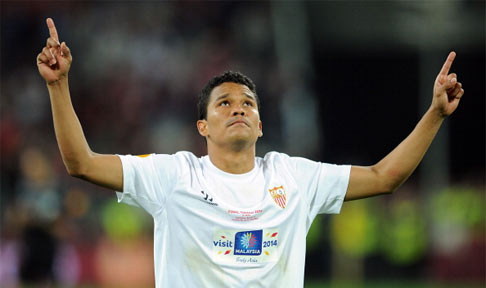 Ever since Newcastle United completed the ‘coup’ of Siem de Jong from Ajax, supporters are slowly but surely getting their hopes up for more signings in the very near future. Although the signing of de Jong cannot come as a major shock, the fashion in which the club sealed a 6 year-deal for the Dutch international did catch a lot of us by surprise as we did not assume that NUFC were in heavy discussions with that particular playmaker. With Siem in the door, all of us are hoping that at least four more first team players will sign the dotted line at St. James’ Park, and the latest name to be linked with a move is Sevilla's Carlos Bacca. The local media up North have run a story for the past couple of weeks suggesting that the Magpies’ had a forward on their shopping list who is currently plying his trade in the Spanish leagues.

Having signed Ayoze Perez from Tenerife a month previous, such intent to lure talent from the La Liga/Segunda División is clear, and although the majority of our targets are of course French-based, it seems that our focus is slowly but surely shifting to different leagues across Europe.

For many of you who may not know Carlos Bacca by name - he is a 27 year-old Colombian striker who joined Sevilla just a year ago from Club Brugge as an indirect, long-term replacement for Alvaro Negredo who made a big money move to Manchester City last season.

Bacca is currently preparing for a dream World Cup quarter-final clash with Brazil, and although much of the focus (all of it!) has been on the incredible performances of a certain James Rodriguez - Bacca is one of the important figures in the Colombian setup. He has not featured in this WC so far because of injury, otherwise you can be sure we would have heard a lot more about him. He would have likely registered a goal or two by now as well.

Newcastle's recruitment lead, Lee Charnley seems to be getting his work in order in the last couple of weeks and my question is, is Carlos Bacca the Spanish based forward that we have been rumoured to be ‘preparing’ a bid for?

I'm a big fan of Bacca and I think he'd thrive in the Premier League, however, his price-tag would likely be too much for Newcastle to swallow. He would represent an excellent purchase, and it comes as no surprise to us to hear that Everton are also keeping tabs on his movement.

We need at least two forwards this window in order to have a real goal-scoring threat for de Jong to supply this season - is Bacca one of our primary targets?