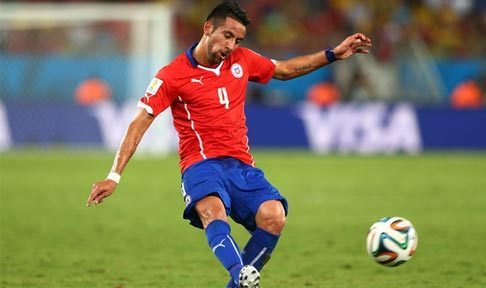 According to Chilean newspaper El Mercurio, Newcastle United have reached an agreement with Juventus over their Chilean full-back, Mauricio Isla. For many of you that watched the 2014 World Cup in-depth, you will have recognised his name, and more than likely, will know him from his endeavours with the Italian champions. The news breaks from a Chilean paper in a report which they claim Newcastle have agreed a $14m fee (£8m) for the 26 year-old and barring something spectacular, he will sign the dotted line on Tyneside in the coming days. The news comes out of nowhere in fairness, and I am not sure how reliable that particular media outlet is, however, we do know that Newcastle were keeping tabs on him, before they eventually completed a deal for Mathieu Debuchy's replacement, Daryl Janmaat.

The news of his transfer is noted on the front page of El Mercurio which would suggest that it is not only an exclusive, but something which they are confident is going to happen.

Personally, I find it a little hard to believe considering we recruited Janmaat, but perhaps, just maybe, Isla is a long-term replacement for Moussa Sissoko who has often featured on the right hand side for the Magpies.

If we do carry out this signing I think it's a big one for the club as it marks another deal which is close to the £10m mark - slowly but surely we beginning to spend some of the cash that has been gathering dust for the past three years.

We need a striker and perhaps a centre-back, but a right-sided player? That would suggest a potential departure, but maybe I'm being a bit too cynical. Time will tell.

What do you make of this news emerging from South America?