Rolando Aarons - Could he make a first team breakthrough this season? 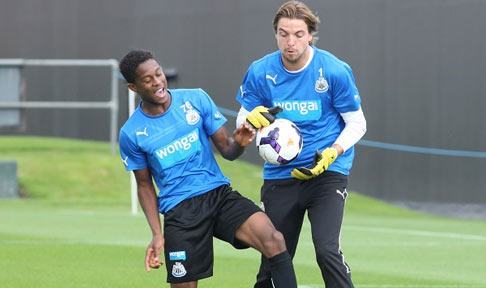 In a summer that has been dominated - and thankfully so - by in the impressive, swift action taken by Newcastle United's in the transfer window, the club's latest pre-season outing in New Zealand against saw 18 year-old Rolando Aarons earn a starting role. The Jamaican winger was named in a line-up dominated by new faces, including summer arrivals Jack Colback, Siem de Jong, and indeed Emmanuel Rivière. It was very pleasing to see manager Alan Pardew start the midfielder in such an encounter, an early indication of the intentions to finally bring through some youth on Tyneside. Thankfully, it seems that there could well be a very good crop of young players coming through, as fellow 18 year-old Adam Armstrong scored an excellent goal in their 4-0 demolition of their opponents Sydney FC, on Sunday morning.

Of course, many of you will know Armstrong from his first team appearances in the Premier League last campaign, but Aarons in a new face to the team, and his involvement has been coming for the past few months.

On that note, let's take a look at him.

Who is Rolando Aarons?

Being perfectly honest, I have not watched very much of Aarons, purely because footage of the man in competitive action is pretty hard to find! However, his name has been bandied about for some time now, with numerous club officials speaking highly of his potential.

Jamaican-born, Aarons arrived from Bristol City at the end of 2012 by all accounts, and has penned a professional contract at St. James’ Park just a couple of months ago.

What position does he occupy?

Aarons is a natural winger, with plenty of place and decent delivery. Some have compared him to a certain Sammy Ameobi both physically and style of play, but Rolando is regarded by many as a more direct player than SA.

One to look out for:

Earlier this year, Newcastle legend Peter Beardsley had this to say about the Jamaican Geordie:

‘He's just signed a new contract with Newcastle and is someone the club are quite excited about. He's like a flying left winger with good ability - really good ability.’

‘He's good running on the ball, which is what you need on a pitch like that, and he's one that we've got high hopes for in the first team. He's probably the main one. We expect him to do good things.’

To me, that seems as good a reference as you'll get on Tyneside.