Is Romelu Lukaku to Newcastle United that unrealistic? 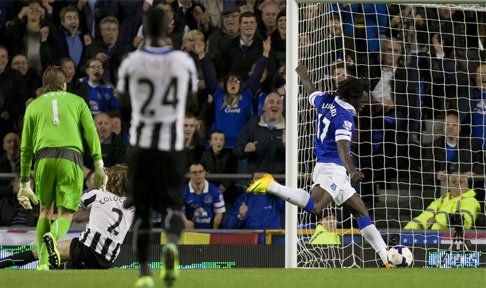 I posed a question on Twitter a couple of days ago about what direction Newcastle United can now go in their pursuit of another forward. Their main targets this summer: Loic Rémy and Alexandre Lacazette have all confirmed that their futures lie elsewhere, and Borussia Dortmund's Pierre Emerick-Aubameyang, who has long been admired by officials at St. James’ Park, does not look any closer to an exit from the Bundesliga despite reports that he could be obtained for as little as £7m this summer. This leads me to another man who Alan Pardew has wanted for quite some time: Romelu Lukaku of Chelsea. The Belgian was subject to an loan-bid from Newcastle last season only for the club to be told that he wasn't allowed to leave. As we know all know, Lukaku later pushed through a loan-move which saw him end up at Goodison Park and do very well.

The eyes of world football were fixed on Romelu Lukaku at the 2014 World Cup and he had a very frustrating tournament, nabbing just one goal, in extra-time, against a United States out on their feet. Apart from that, he was rather disappointing - but that hardly comes as a shock as there was too much expectation on his own shoulders, and that of his nation, Belgium.

Lukaku's future has been up in the air ever since he joined Everton on loan, and with the arrival of Diego Costa at Stamford Bridge in a big-money move, there is little chance that Lukaku and the Spaniard will ever strike up a partnership up front. It's either one or the other and I have a good idea of who Mourinho desires to lead the line.

It's also worth noting that Didier Drogba is also making his way back to London.

Atletico Madrid were one of the itnerested parties this summer, but their financial picture remains to be quite a bleak one and instead they opted to sign Mario Mandžukic from Bayern Munich for a reporter fee of £17m, although no one quite knows the official figure.

Mandžukic would be more suited to Atletico's style of play, rather than Lukaku and to be fair - he's that tad more experienced, particularly when it comes to Champions League football.

Now with Atletico out of the race and Chelsea seemingly wanting rid, it leaves Everton as the primary contenders for his signature. However, their finances are often in question as well, meaning it would come as quite a surprise if Roberto Martinez's men dished out south of £20m for his services.

Are Newcastle in with a shout?

Alan Pardew has often recalled his great relationship with Chelsea manager Jose Mourinho, and the positive words have flown in both directions. This could play a big part in any move if Newcastle are really serious about bringing a marquee forward to St. James’ Park.

Despite exaggerated fees in the window nowadays, £18m is rumoured to be what Chelsea will sell for, plus a decent sell-on clause I would imagine.

At this moment Newcastle have not really dipped into their funds when one takes into account the sales of Mathieu Debuchy and Yohan Cabaye. The money is there to land Lukaku and he does fit the NUFC blueprint perfectly.

Another similar season to that he had at Everton and he could easily demand £25m next summer at the very least.

He is young, athletic, with his best football ahead of him. Behind a midfield of Siem de Jong and even Rémy Cabella - a move to St. James Park could be a perfect career choice for the 21 year-old.

Of course any interest from NUFC will be laughed off by the majority, but deep down — this move could happen if everything is given the clearance from above.

Would Lukaku be interested in joining Newcastle? Well if he's willing to talk to Everton, then I'm sure we could sit him down at thrash out a potential deal too.

One can always hope, but if Newcastle mean serious business, then they will make a move for the Belgian. Imagine how threatening the Magpies could be with him leading the line aided by an established midfield.