Alan Pardew has a big decision to make 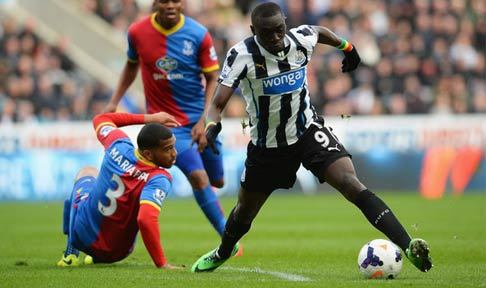 Few football fans will ever forget Papiss Cissé's incredible effort against Chelsea at Stamford Bridge during the 2011/12 Premier League season. The Senegalese international rifled an almost physics-defying ‘banana effort’ over Petr Cech's head and into the back of the net to complete one of the best Premier League braces I have seen in quite some time. After that season came to a close, the real Cissé seemed to disappear. Following Newcastle United's exit from the Europa League to Benfica at the Quarter-finals stage, Papiss failed to find any real form and the club's season suffered from then on - narrowly avoiding relegation. The 2013/14 season started brightly with NUFC coming within touching distance of the Champions League places at Christmas, however, this form was purely down to the on-loan Loic Rémy, and a ever-present classy Yohan Cabaye.

Fastforward to August 2014 and as Newcastle prepare for another Premier League campaign, hopes are somewhat higher on Tyneside that the season previous. With a handful of smart signings, Newcastle are giving themselves every opportunity of a crack at the Top 6/8, however, the ability of the manager charged with the task is another matter.

Despite the new arrivals, there is still a void that needs filling - the centre-forward position. Emmanuel Riviere will of course lead the line for the season's opener against Manchester City, but officials at NUFC are still desperately trying to secure a deal for either Loic Rémy, or as some reports suggest - Abel Hernandez. Basically, they want another striker.

While many are eager to see a new forward arrive, one must remember that Papiss Cisse is still on the books at Newcastle. The #9 still has a lot to offer the club, and I believe that if our search for a striker proves too costly, then the hierarchy will take a gamble on having just Riviere, Facundo Ferreyra, and indeed Cissé.

Of course Cissé has yet to recover fully from his injury, but the reports emerging of his state are encouraging. What is even more encouraging for all concerned is the fact that should he command a starting role sooner or later, he will surely have the ammunition behind him to get in on the scoring act.

The assistance of Rémy Cabella, and indeed Siem de Jong should benefit any forward, and if Cissé can get his sharpness back, he could be lethal once again. Such quality in front of goal is not lost over the course of a season.

Question is - does Pardew strongly push the need for another forward, or take a gamble on regaining Papiss Cisse?

We do know however, that Lee Charnley are co. are most certainly on the look-out for another striker and there is a hope that Loic will agree to a deal that has been on the table for quite some time. Alexandre Lacazette seems to be staying put at Lyon until the New Year at least, and other than that, Abel Hernandez of Palermo is the latest name linked, but it is not the first time for such a link to surface.

Attempts will be made to lure Rémy between now and the close of the window, and should that fail, perhaps the club will look at Plan D whoever that involves.

If, if, the plan does not come together then I think the focus will fall on rejuvenating Papiss Cissé. Many will pray that it does not come to this, but I'm probably one of a few that believe he can regain his form in the current setup.

Time will tell, but time is running out to secure a top forward.