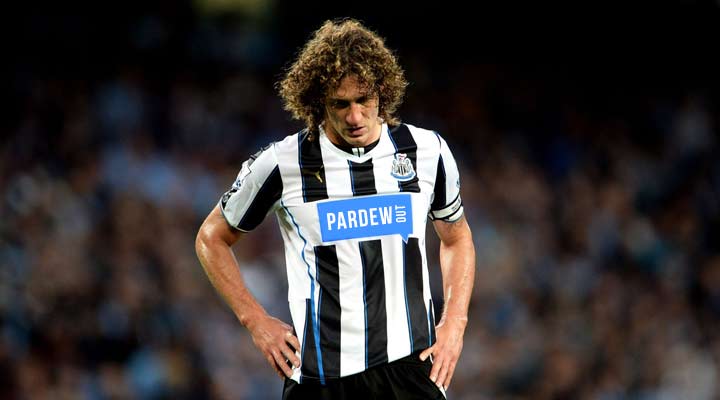 With less than 20 hours till Newcastle United play host to what is expected to be the most toxic atmosphere in the club's history, club ‘captain’ Fabricio Coloccini has called on supporters to come out and give the team their full backing when they take to St. James’ Park against Hull City. Coloccini, who arrived on Tyneside in 2008 under Kevin Keegan has gone on to become on of Newcastle's finest defenders in recent years, however, over the past 12 months, the Argentine has lost the respect of a considerable number of supporters, including myself. A failed attempt at forcing a move back to his native Argentina was the start of rocky road for Fabricio, but today he has reached new levels ahead of the clash with Steve Bruce's men at 3pm on Saturday.

As manager Alan Pardew potentially prepares for his final ever game as manager of this fantastic football club, Coloccini has taken time to urge supporters to come out in force tomorrow and provide a positive atmosphere.

The 32 year-old has called on fans to rise above the planned anti-Pardew protests and emit encouraging vibes as the Magpies attempt to secure their first three points of the new season.

Being perfectly honest, I could not believe my eyes when I read this:

‘We are football fans too, so we understand that things can get frustrating. But please, support the team for 90 minutes inside the stadium.’

‘We need your support. We have a lot of new players and a young squad.’

‘They need your backing, a push from you and a positive atmosphere to get the best out of them.’

‘Hopefully, you can cheer us on to three points and that will give our season a real boost.’

Those five sentences are an insult to Newcastle fans, in particular, the loyal supporters who travel the country following their side. Almost 3,000 made the lengthy trek to Southampton last weekend where they were subjected to one of the worst performances in the history of Newcastle United.

No effort, no interest, no desire, no passion. It was a ridiculous performance from a squad that looked like they wanted rid of their manager. Regardless, it was a crime against the supporters who travelled hundreds of miles to watch absolute drivel for 90 minutes.

However, what really took the biscuit was the fact our captain Fabricio Coloccini made a dart towards the tunnel when the full-time whistle sounded, barely acknowledging the travelling support. This is the man who is pleading for fans to come out and be the 12th man against Hull City. Is this guy for real?

It angered me even reading it, and as many of you will know, I am an Irish Newcastle fan, so I do not have the pleasure of following my side around England throughout the year. Saying that, I would be absolutely insulted reading those comments from Colo, bearing in mind his demeanour at the end of the game vs. Southampton last week.

Newcastle new-boy, Daryl Janmaat was the figure ushering NUFC players to applaud the support in the away end at St. Mary's last week, that could well tell you about the state of affairs on Tyneside at the moment.

As far as I'm concerned, Pardew can instruct all of his players to echo what he has been saying all week but the game is up - Alan Pardew's position in untenable, and he will never regain the respect of the majority of Toon fans.

It's a sad, sad story when I'm hoping for a Hull City victory tomorrow to hopefully force some action from Mike Ashley. I miss the days when players played for the shirt, and for a manager who did the club proud.