Cheick Tioté wants out as Pardew limps on 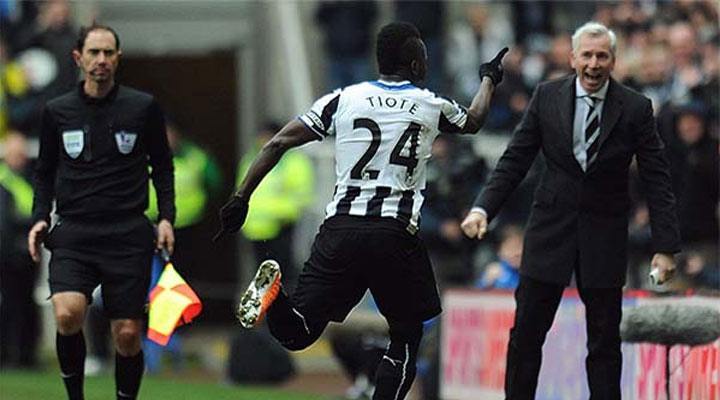 When Peter Crouch easily rose above captain Fabricio Coloccini to nod home what turned out to be Stoke City's winner, it was all too familiar for Newcastle United fans. There wasn't despair, no head in hands, no tears. A sense of acceptance swept through a wet Brittania Stadium. Then, as per the last few games, chants and banners dominated the TV screens as the majority of Newcastle supporters voiced their anger, and demands to the away dugout. The message was clear, Alan Pardew is finished, his relationship with the real fans of this club, irreparable. Lining out in their third kit, the eleven Toon players on the pitch tried desperately to garner an equaliser. Our right-back, Daryl Janmaat coming closest with a fierce effort from outside the area. Our forward line was blunt, a certain chemistry nowhere to be seen. Rémy Cabella tried to show his creativity by running around Stoke players, but alas, nothing gave. At half-time, in typical Pardew style, he didn't go offensive, merely replaced an anonymous cog in the Toon forward line, bringing on an unfit Papiss Cissé for an underwhelming Emmanuel Rivière.

The men in Navy and Green battled on, desperately seeking to restore parity. It was the energetic, and clearly passionate local lad, Jack Colback that summed up the night in Stoke with a rasping left-footed strike from four yards out. It smashed against the crossbar when it might have been easier to score.

The final whistle sounded, and again, it wasn't shock or disbelief that dominated the away end, rather, forbearance. They say winning is a habit, but losing is too, and the latter is a habit which we are well used to under the stewardship of a certain Mr. Pardew.

Social media was dominated by 6 second clips of Mike Ashley muttering something to secretary Lee Charnley before departing the posh-seats. An overwhelming majority claimed he has said something along the lines of ‘definitely, gone, see him now’ seemingly with AP in mind. The next day, the club told Sky Sports that Pardew was safe, even if the club suffered defeat against Swansea in their next fixture. Outrageous, but hardly surprising.

After the game, Pardew told Sky his usual waffle of slight margins, and of the venue being a difficult place to play. Shortly after that, Mike Williamson entertained the same reporter and claimed that the dressing-room was right behind their manager, and that they would continue to fight until they discovered form i.e. the ability to win a football match. I've noticed in recent weeks the word** fight** has begun to dominate pre/post-match comments. Hilarious considering we have seen very little of it since the opening fixture against Manchester City.

Captain Fabricio Coloccini has also spoken of the desire to put things right and claimed that the whole squad backs their current manager. The wantaway Argentine has shown in recent months that he is clearly incapable of serving as captain of this football club any more.

Two days after the recent defeat, midfield battler and one of the more senior figures at the club, Cheick Tioté confirmed to the media that he wants to leave Newcastle United. Interest from Arsenal and the need for a new challenge cited in his recent comments. But of course, the squad is united, is it not?

Furthermore, October - virtually three months before the transfer window - is a perfect time to announce your intentions to leave a club as well, right? Laughable.

As far as I'm concerned, Tioté can leave, and bring Pardew with him. I'm sure a bigger club would want some consistency from the Ivory Coast midfielder though, so there might a problem in getting his dream move right there.

Swansea City are our next opponents and our next defeat no doubt. I just can't wait to see how Coloccini and Mike Williamson attempt to deal with Wilfried Bony, or indeed what Pardew has to say when he oversees another heartless defeat.

Needless to say, the fantastic support will make the undergo the journey Wales for it, and hopefully make life as uncomfortable as possible for Pardew and his dreadfully-poor sidekicks (John Carver & Andy Woodman).

Comments welcome as always, and be sure to give me a follow @KevinDoocey if you fancy it.