Sammy Ameobi beginning to take his chance on Tyneside 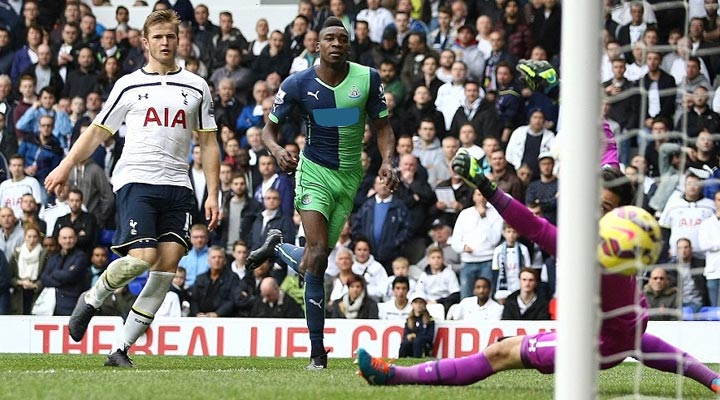 When Newcastle United scampered down the tunnel after a ridiculously poor first half showing against Tottenham Hotspur, Toon fans began to ask the question - what kind of gameplan did NUFC really bring to White Hart Lane? Whatever the idea of the first 45 minutes happened to be, it was nothing short of appalling. We didn't create a chance, and the majority of the players didn't look bothered about representing the shirt they were wearing. The second half however, was brilliant. As many of you will know, I - alongside thousands of other Newcastle fans - find it quite difficult to get excited about the Toon these days, but the second half was refreshing to the say the least. We looked a proper Premier League team. The players worked tirelessly, and actually went at the Spurs defence for the kill, a tie which was eventually settled by the highly-talented Ayoze Perez on his first league start.

The arrival of Sammy Ameobi and Rémy Cabella changed the game. They both added a dynamic to our forward line that didn't exist in the first half. Just 7 seconds into the second period, Jack Colback pulled off the pass of the season so far from inside his own half to set up Ameobi for NUFC's equaliser.

The lanky winger took it in his strike before sending a bullet past Hugo Lloris into the bottom corner - a fantastic finish, and a response that had Spurs reeling from the get-go.

Then came Ayoze's goal - a brilliant header in between two defenders after an enticing delivery from Rémy Cabella. The quality of the ball from the Frenchman invited a glancing header from Ayoze, and the slick-haired forward duly obliged to send the away support into raptures. Owner Mike Ashley was also said to be rather pleased.

Perez, who earned his first start in Green and Navy due to a warm-up injury to Papiss Cissé looked unfazed by the big stage, and his goal was a glimpse into the future. The lad has the quality to reach the highest levels of football, make no mistake about that. In fact, I'm quite confident that Ayoze will earn a senior cap for Spain in the future - I wonder if I can get a punt on that.

Coming back to the actual title of this post, I think Sammy Ameobi deserves huge credit for his performances in recent weeks. His introduction at home to Hull signalled a change in the complexion of the game, and he came off the bench to rescue a point for the travelling Toon away at Swansea with a peach of a cross for Papiss a week later.

Sammy is someone who has been living off a reputation of being a very talented kid for the past few years, and the time has come for him to either shape up, or be shipped out. It seems that he has risen to the challenge, and his goal against Spurs on Sunday marked - or at least I hope - the arrival of the player that deep down we knew we had on our books.

We are far from out of the dirt yet however, and tougher fixtures lie ahead, but it was nice to enjoy NUFC for the first time in quite a while. Pardew's position is undoubtedly safe until the New Year, so we may as well do our best to encourage the players if nothing else.

To tell the truth, I'd still have sacked AP after yesterday's victory if given the opportunity, and I do think that we'll be cursing the club in the not too distant future, however, I'd rather leave on a positive note. The players were brilliant in the second half. Sammy, Rémy, Ayoze, Moussa Sissoko, and even Steven Taylor - all excellent.

On to the next then..