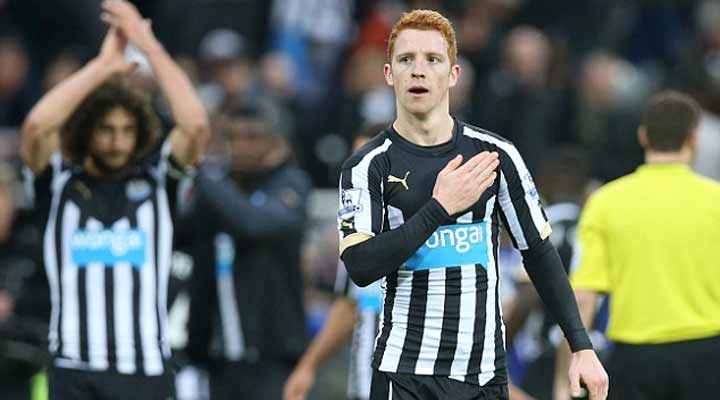 When Jack Colback completed a free transfer to Newcastle United from bitter rivals Sunderland, few would have imagined that the 24 year-old would become the first name on the teamsheet at St. James’ Park. As many of you will know from reading my articles, Jack Colback is someone I always rated, particularly during his time at Sunderland, in other words, I did fancy him to evolve into a very good midfielder on Tyneside, but perhaps not so soon. [Self praise over!] To say he is our most consistent midfielder so far this season is putting it mildly. He has been nothing short of fantastic, and his performance against Chelsea on Saturday last was one of the finest I've seen from a Toon player in the centre of the park in quite some time. Diego Costa, Eden Hazard and Willian all endured a miserable afternoon on Tyneside, thanks to the heroic workrate, tackling precision, and all-round quality passing on display from our #14.

While he may not have the creativity of the departed Yohan Cabaye, Jack does have vision going forward, proven by his delightful ball to Moussa Sissoko which resulted in the winning goal. When he wasn't shutting down shop in Chelsea's attacking third, he was busy spraying the ball to the flanks. Papiss Cissé may have stolen the morning headlines, but Colback was just as vital in securing all three points.

While I can claim credit of being one of few NUFC fans that genuinely embraced the signing of Colback from the folk up the road, I have to confess — I didn't see him gaining a starting role ahead of Vurnon Anita, at least so soon. Months on and Anita cannot get a look-in to the first team while Colback has truly become the side's lynchpin in midfield, and both cases deservedly so.

With the Tyne-Wear derby just weeks away, I cannot wait to see Colback in action against his former employers. His top performances aside, the picture above captures what playing for Newcastle United really means to the 24 year-old. He gives 100%, plays for the crest on the jersey, and brings a true Geordie passion to our midfield, perhaps something that may have lacked in years previous.

It is only a matter of time before Jack eventually gains his first cap for the England seniors and when that happens, what a journey it will mark for the Killingworth-born lad. A passenger and unrealised talent in the Sunderland side to a midfield-rock at St. James’ Park. Let's hope he can help the rest of the side arrest our derby slump of recent years.

Either way, he most definitely rivals any other summer signing as the bargain of the summer. Long may his form continue.