The best £5m Newcastle United have spent in the last decade 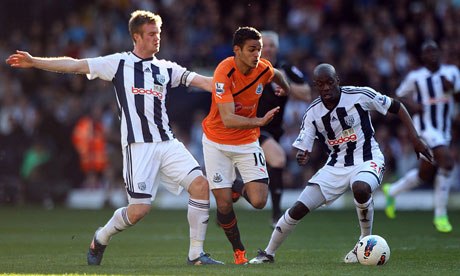 I think it is fair to say that Hatem Ben Arfa played his best ever 75 minutes in a Newcastle United shirt last Sunday against West Brom. His touch, pace, movement and vision crafted two goals for Papiss Cissé, before taking time out to score a beautiful effort himself. He didn't put a foot wrong all game long and ran riot any time he got the ball to his feet. If he wasn't setting up an attempt for our two centre forwards - then he was busy holding on to the ball and resetting the pace of the game to his own liking.

The best thing about it all? I knew that it was coming, and that it was only a matter of time before wor Benny began to terrorize defences into submission.

From 2002 onwards we have seen a lot of players arrive on Tyneside for big fees, and leave behind an even bigger disappointment. Not this time though. Ben Arfa joined initially - what was then Chris Hughton's Newcastle United - on loan from Marseille with the option to turn the loan move into a permanent deal for £5m.

Alan Pardew was appointed a little while after, and in January of the New Year, whilst Ben Arfa recovered from a broken leg he suffered away to Manchester City, the NUFC backroom team decided to take a gamble and splash the five million on the Frenchman.

Of course we've had some good signings since the turn of the millennium - but Ben Arfa is my pick. Young; considered in high regard by a lot of the footballing world; exciting - and only £5m. For what we've managed to land, you won't get much better value than that.

Cheik arrived for £3.5m in a great piece of business and could easily go for seven times that, but Ben Arfa is something different.

People do not realise how good this chap can be provided he's brought through correctly.

A hot head? Maybe, maybe not. We're sure Alan Pardew can take care of that if anything arises.